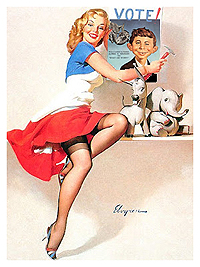 Ever since we resumed our sundry weekly columns I’ve asked our writers to keep their focus on our popular culture in general and, as often as possible, on comics in specific. I have no problem linking the events of the day to our culture; indeed, that usually brings a nice contemporary perspective to our cheap thrills. At worse, it makes for a fun rant.

I commend our ComicMix columnists for their faithful cooperation and effort. And so, now, I’m going to violate my own edict. I’ve done this little rant ever since those hallowed days of the real First Comics three decades ago. Somehow, I even managed to get away with it at DC Comics. So, true to my Ashkenazi roots, I am going to maintain this tradition.

Next Tuesday is election day. In telling you this, I’m assuming your teevee set is broken. We get to pick us all of our Congresspeople, a third of our senators, a petulance of governors, a shitload of local officials, and, oh yes, a President of the United States. All are important in that each winner will have his or her foot on our necks and his or her hands in our pockets. We are given the holy right to choose our oppressors.

“But Mike,” you might say (if you’re being polite), “if they’re just going to oppress us, why should we bother?”

And odds are overwhelming that the winner will be choosing the next member of the Supreme Court. Maybe the next two.

You know the Supreme Court. The folks who are the last word on all of our laws and who, for years now, have decided a great many things by a one-vote margin? Yeah, those folks. They even decide elections. Whoever wins the election next week is likely to bring about a fundamental change in our nation’s laws and procedures, one that will have an effect for decades and decades to come.

Are you opposed to abortion? How about our medical care laws? Corporations-as-people? Super-PACs? Incarceration of marijuana users? Next Tuesday is your big chance to put your left foot in, your left foot out, your right foot in, and shake the nation all about.

I do not care whom you vote for. Well, that’s a total lie; of course I do. But that’s not the point here. No matter whether you’re smart enough to agree with my politics or you’re some kind of stalking Neanderthal, this Tuesday get off your ass and vote!

If you decide not to do so, you lose your moral right to bitch. And that, dear friends, is among the greatest of all pleasures.

Next week, back to life’s more important matters.