Mindy Newell: Trust Me, This Is About Comics. Really. 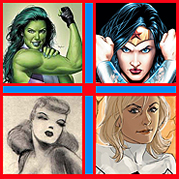 There’s a lot of hogwash being said by Republicans these days concerning women. Legitimate rape. (What the hell is that?) A woman has the ability to shut down her ovaries if she doesn’t want to get pregnant. (Gee, I wish I had known that.) Contraception should not be covered by health insurance. (But Viagra and other anti-erectile dysfunction drugs are.) A mother’s life is no longer at risk when pregnant, so an abortion to save her life is not necessary. (Placental abruption, preeclampsia, eclampsia, peripartum cardiomyopathy and other cardiac problems, thromboembolytic disease, diabetes, seizures, bleeding disorder, genetic disorders.) A woman has no right to equal pay for equal work. (She-Hulk, Captain Marvel, Wonder Woman, Invisible Woman, have you checked your paychecks lately?) Women in binders. (Nobody puts Baby in a binder.)

I personally cannot understand any woman voting the Republican ticket right now. Which got me to wondering…

What side of the aisle do some of the women of comics sit on?

Lois Lane: Journalistic integrity is her middle name. I imagine Lois being a frequent guest on MSNBC, Jon Stewart, and Stephen Colbert, as well as having guest-hosted SNL more than once. She’s also friends with Joan Walsh of Salon.com, Maureen Down and Gail Collins of the New York Times, Candy Crowley and Christine Amanpour of CNN, not to mention Andrea Mitchell, Katie Couric, and Rachel Maddow. Voted for Hillary Clinton in 2008, proud of Hillary’s work as Secretary of State, and a strong supporter of Barak Obama. Decision: Registered Democrat.

Carol Danvers (Captain Marvel): Hmm, this is a tough one. Given her Air Force brat upbringing and her own service in the United States Air Force, the natural inclination is that Carol is a staunch Republican, as the Republicans have long been believed to be the stronger party on defense. However, Carol’s heroes are Amelia Earheart, Jacqueline Cochrane, Geraldlyn Cobb, Sally Ride and now Colonel Jeannie Flynn Leavitt, the first female fighter pilot in the U.S. Air Force, and I can’t see her being behind the Republicans these days because of their stance on women and women’s rights when it comes to equal pay for equal work. And I’m positive she doesn’t want anyone sticking an ultrasound probe up her vagina if it’s not medically necessary. Still, I’m sure she’s voted Republican in the past. But I think she also admires Obama’s tough stance on terrorism and his ability to quietly and efficiently green-light the hunt for Bin Laden, which resulted in his (good riddance!) death; and although I think she’s confused about what happened in Libya (just like the rest of us), she knows that fuck-ups happen. Decision: Independent.

Susan Storm Richards (Invisible Woman): I’m sure Susan, along with her husband, is heavily invested in technology in the market, and I’m betting the Richards (not to mention the entire Fantastic Four team) lost mucho dineros in 2008 when the market crashed. Still, I bet her hubby sits on the boards of some of the major defense contractor industries, such as General Electric, JPL, and Boeing. Still, while her husband may be strongly pro-Wall Street and a staunch Republican, I’m thinking they have a marriage like James Carville and Mary Matalin, only in reverse, with Susan, with her strong feelings about women’s rights, especially equal pay for equal work and pro-choice advocacy, working behind the scenes for Obama, throwing fundraisers and donating money. Decision: Democrat.

Wonder Woman: This one is easy for me, since I believe Wonder Woman is firmly against abortion. Not that she can vote, since she’s only got a green card (I presume.) Decision: Republican.

Jennifer Walters (She-Hulk): Jennifer is a lawyer. She’s probably met Elena Kagan and Sandra Day O’Conner, and I wouldn’t be surprised if she knows Gloria Allred, Judge Judy, and Nancy Grace. I’m thinking she believes in the idea of the Constitution as a living document, able to mature and grow, so she’s s definitely not a fan of Clarence Thomas, Antonin Scalia, or Robert Bork. Chief Justice Roberts’s decision on the Affordable Health Care Act as constitutional probably surprised her as well as everybody else, knowing his legal record. I’m thinking that she believes Roe vs. Wade is now the de facto law of the land, so she would never work for a client who wants to overturn it, though I’m not sure if she’s pro-choice. I think she hates the way the Tea Party, which has been absorbed into the Republican Party, quotes the intents of the Founding Fathers as if they were there. She thinks Sarah Palin is a joke and feels sorry for John McCain, who ruined his long and honorable career by picking her as a running mate. (She would have voted for him otherwise.) Has voted Republican in the past, but leans Democrat these days. Decision: Registered Independent.

In closing, there’s terrific video over at Jezebel.com that I recommend every woman reading this to watch – and pull up a chair for the man (or men) in your life. It’ll make you laugh…

Oh, and for the record, I’m a registered Democrat.

As if you couldn’t guess.