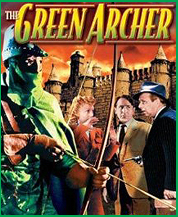 So okay, we can get our superhero fix without leaving the house. (And isn’t this what we all desire? And pass the chips…) SyFy’s Alphas, which is watchable, is back doing its weekly thing and this week we’ll see the debut of Arrow, based on a character who’s been around for 71 years. I mean, of course, Green Arrow created by Mort Weisinger and George Papp and, shall we say, “inspired” by The Green Archer, first a novel by Edgar Wallace and later a movie serial, and further inspired by the success of another costumed vigilante, Batman, who was getting mighty popular along about 1941.

I know very little about the television incarnation of – let me confess – my favorite arrow slinger beyond this: the TV folk are using the character’s first origin story, which has Oliver Queen, one of those soigne millionaires who littered the pop culture of the pre-war era, shipwrecked on a deserted island and learning to be a whiz with a bow in order to survive. That’s what I know. I don’t want to know more.

We are saturated with information about our entertainments and I wonder if that doesn’t get in the way or responding to them as evolution intended. We know that this actor is feuding with that actress and they’re both mad at the producer and… I guess we can still perpetrate a willing suspension of disbelief (which your English teacher told you was vital to enjoying fiction). But maybe such suspension doesn’t come as easily as it did in the pre-information age and maybe we bring to the story expectations fostered by show-biz venues which influence, for better or worse, how we respond to what we’re being shown. Maybe it’s becoming a chore to bring to the enterprise what some meditators call “bare attention” – simply responding to, and being amused by, what’s there in front of us. As for being surprised by plot twists and the like, once a staple of light drama… good luck!

Am I blowing smoke? If I am, I’m blowing it into a fan.

I used to enjoy Mel Gibson movies. But I can’t, not any more, not after his anti-Semitic ravings and espousal of Neanderthal Catholicism, all of which was thoroughly reported in the media.

A few months ago, I saw a Batman movie. I thought it was a fine movie and I still think so. But I knew that Talia – let me confess – my favorite daughter of a maniacal mass murderer, was in the story somewhere and I kept trying to jump ahead of the screenwriters and guess exactly when she would appear who she would turn out to be. (I was wrong.) Yep, nifty flick, all right, but maybe my enjoyment of it was just a bit dimmed.

On the other hand…Marifran said that if she’d known that the cult portrayed in the fine new film The Master was based on Scientology, she would have enjoyed it more.

It is not a one-size-fits-all universe.

But, dammit, I know that there’s information about Arrow available on the net. And I’m not going near it.