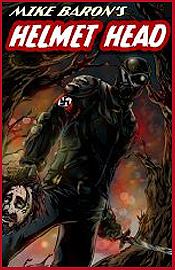 Our pal and (very) occasional ComicMix contributor. high-energy comics writer Mike Baron (Nexus, Badger, Punisher, Deadman), has written us a novel and has taken it into the ether.

Helmet Head has been published as an Amazon e-book, available via the Kindle app on all computers, smartphones and tablets. It costs $4.99, which is pretty good for a full-length novel. Helmet Head is a horror piece that started out as a movie concept developed for movie director Ian Fischer about a monstrous motorcyclist who rides around the Little Egypt area in central America lobbing off the heads of other bikers and, one supposes, the occasional saluki, all expressed with the subtlety and sensitivity we have come to expect from the talented Mr. Baron.

For example, Mike refers to Helmet Head as containing “scenes of graphic violence that would gag a dog off a gut wagon.” It’s got plenty of bikers, high-holy-horror and senses-shattering action that certainly will thrill his many fans. Clearly, this is a date-night kinda novel.

Baron’s tome is the first of a trilogy – Whack Job comes out later this month and Banshees winds up this arc after the first of the year. And can a comic book adaptation be far behind?

You can gawk at Helmet Head’s interior or actually purchase the book by merely clicking on this link.