Coming in 2013: The Cestus Concern

THE CESTUS CONCERN is coming January 2013
The most dangerous man on the planet must get a secret out of his head…before they remove it.
The Cestus Concern
Written By: Mat Nastos
Cover: Mat Nastos and Thomas “Orc Girl” Boatwright
Release Date: January 25, 2013 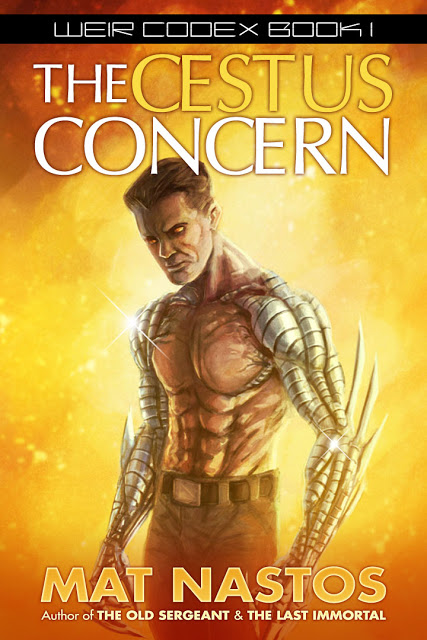 For the past 20 years, Mat Nastos has been writing, directing, and illustrating for television, motion pictures, comic books, and video games. In 2013, Nifty Entertainment will be releasing the first novel by Nastos, a science fiction action tale called “The Cestus Concern.”
WHO IS MALCOLM WEIR?
Waking up in an operating room, much to the surprise of the attending surgeons, Malcolm Weir frantically fights his way out of a secret government installation, located in downtown Los Angeles. Battling through a mass of armed guards and meta-gene operatives, the cyborg warrior realizes he has no memory of how he got there.
The past 11 months are gone.
With a hole in his mind, Weir must retrace his steps for the past year, fighting his way through the nearly endless horde of super powered mercenaries and assassins the government sends after him.
Travel along with Weir, facing some of the most intense action ever put to paper, along with a body count of ridiculous proportions, as he tracks down the secrets trapped in his head.
In the end, Weir must stand alone against a former friend and a squad of the deadliest killers ever created, all to learn the terrifying truth behind Project: Hardwired.
Fans of films like “Bourne Identity” or “Smoking Aces,” or the comics of Deadpool and Wolverine, will love the over-the-top science fiction action of “The Cestus Concern” by Mat Nastos.
Find out more about “The Cestus Concern,” including an exclusive excerpt from the novel, at: http://www.niftyentertainment.com/2012/11/12/the-cestus-concern-the-weir-codex-book-1-by-mat-nastos/
Share