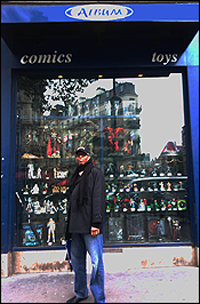 I’ve been here for a week and I must say it’s quite the experience. I’m on record as having said I hate the French so this is quite interesting. Allow me a moment to explain where that ‘hate’ sentiment came from…

About, maybe, 20 years ago I was at DC comics delivering some work. I was in the lobby having a running conversation with Clark Kent and using the free phone that sat next to Clark to call just about anyone and everyone I wanted to talk to at the time.

Mostly I would just call girls trying to impress them with the fact I was calling them from DC Comics where I hanging with Clark while I waited to have my important meeting with an editor who was just crazy about my work. It never really dawned on me until much later that unless you want to be in the comic book business or you are a fan of comics, no one and I mean no one is impressed with anyone who works in the comic book industry.

In my youth, let’s see 20 years ago I was five, I just assumed that everybody thought the comic book business was the place to be and the world was impressed with my being involved in it.

That is about as true as my Jewish heritage.

For the most part the industry was looked upon as a place where grown ups waste their hard earned degrees in art or literature drawing or writing ‘funny books.’

If you wanted respect in regards to your comic career that respect could only be found at a few places such as comic conventions, comic book stores, art schools or on movie lines waiting to see films like Star Wars or Raiders Of the Lost Ark.

I’d heard back then that in France and Japan comics were truly looked upon as a respected form of art. The only real and true American art forms are Rock and Roll (thank black people for that) jazz (ditto), the musical and comics. I admit not knowing who is responsible for the musical but I suspect that came from an enlightened white person, but for comics you can thank Jewish Americans.

But, (Peter, next SDCC dinner is on me) I digress. So, as to the reason I started to hate the French…

As I was hanging with Clark and and running up DC’S phone bill I began to hear a fairly loud yet strange sounding voice, not strange as in I did not recognize the person (I didn’t) strange as in foreign.

Trust me, I know a bit about being loud but the loudness in this voice had a pleasing tone to it so I was intrigued as to the origin. The speaker was a French artist and he was talking to another French guy…in French.

They were having a grand time, talking in French and laughing really hard. When they paused a bit one of them turned to me and asked (in English) where the subway was. I told them then I asked what was so funny.

When I asked that, they looked at each other and started to crack up again.

Finally the guy who asked for directions said “Your American comics are light years behind where we are in France with our books.”

“What,” I began in a slow and measured voice, giving him the benefit of the doubt that what he said was not what I heard, I mean he was speaking in a foreign tongue, “do you mean?”

Well, what he meant was what he said, which was in effect that American comic books sucked. Then he proceeded to tell me that America sucked also on a few fronts.

You know, I remember exactly what I said (because I keep a journal) so I’ll just recount that…

“You are out of your pussy French mind! We created the comic book, we have the best goddamn artists and writers on the planet! You know how I know that? Nobody is making movies and TV shows out of your bullshit content motherfucker! As far as America’s standing in the world I remind you it was us that saved your butt when the Germans were peeing all over your punk ass, bitch!”

I had a bit more to say but it just so happened that Jenette Kahn walked in and invited me to her office… in other words she stopped me from bitch slapping that asshole and/or embarrassing myself further with my all too loud tirade.

So, that is the reason that I’ve hated the French all these years. That one incident tainted my judgment for decades. Over the last few years I’ve come to realize that a lot of my thought process was wrong, I’ve admitted that I’ve been an asshole on many subjects. The one thing I’ve never let go no matter how silly it was for me to hold on to was my hated of the French.

That moment in time with that pussy at DC really made me madder than most things had before or since. If you really know me or read my rants on Michael Davis World (plug!) you know that, that’s some kind of mad!

I was dead wrong.

The French are decent people and as far as comics go they respect the medium like the art form it is. To this day in America the mainstream does not give the kind of respect to the comic industry that we deserve. Yes, it has gotten much better but still “I work in comics” will most likely get you little respect, if any, and may get you ridiculed or worse.

Not here in Paris.

That means “incredible” to those of you that don’t know any black people.

I was asked for an autograph in a Paris comic book store. I thought the person asking thought I was someone else but no…

“ I think you are mistaking me for someone else.”

Hell yeah, you French hottie you!!!!

No, I didn’t answer her like that but she was hot.

So, I was wrong and I was stupid not to see it before I came here. I’ll be here another week working on a project and before I leave I’m going to make it a point to talk to as many French people I can about comics. I also have another reason to now love the French they all seem to adore Obama.

I’m not kidding. They love that guy and hate Mitt.

Lastly, if by chance the French artist I met at DC all those years ago is reading this I’d like to say that you were right about one thing. The French are light years ahead of America when it comes to respecting the medium.

That said, you can still kiss my ass.

You don’t come in our backyard and talk shit about us no matter how cool your people may be.

BTW, I was not kidding about sitting next to Clark Kent at DC. There was a life sized stature of old Clark sitting in the reception area and I’d sit there and make free phone calls. Those were the good old days…