HANCOCK TIPS HIS HAT TO THE DEBUT OF PI NICHOLAS COLT! 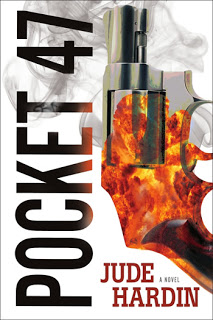 One of the best liked, most lampooned, often replicated, sometimes screwed up, extremely action packed, twisty and turny sub-genres of Pulp is the Private Eye tale.   Everything from Hard Boiled to Cozy to Armchair to Science Fiction to Western to on and on ad nauseum, the PI story has endured many a different take and new coat of paint and withstood rather well.  But sometimes the best way to treat a PI is straight ahead and direct, even if it’s a tale clothed in modern trappings.  There’s never anything better than a two fisted, guns blazing gonna do what he’s gotta do gumshoe.   And it’s even better when characterization rides alongside the plot like Tonto following The Lone Ranger.
That is ‘Pocket 47’.
Jude Hardin introduces PI Nicholas Colt in this novel and Colt comes in with a ton of tragic baggage and a moral code akin to Chandler’s Marlowe and Parker’s Spenser.  A former top selling blues guitarist in a band, Colt’s life took a horrible turn when a plane crash claimed his band and his wife and daughter, leaving him as the only survivor a different man.   Years later, Colt lives in an Airstream trailer in Florida, fishes when he wants to, doesn’t play the guitar, and works as a private eye with a reputation for working runaway cases.
A client enters into Colt’s life as the novel opens, a young nurse desperate to find her fifteen year old sister who she had rescued from foster care and who has now ran away.   What starts as a typical case of tracking the girl to her favorite haunts and hiding spots takes a turn when Colt finds her and she claims someone is trying to kill her.  What ensues is murder, kidnapping, fist fights, good and bad cops, a religious white supremacist leading an army of zealots, and most of all secrets.  Secrets surrounding the runaway.  Secrets that engulf almost everyone Colt meets along the way.  And most of all, secrets that may very well tie into the most horrible event in Nicholas’ Colt’s life.
In ‘Pocket 47’, Hardin makes everything count and matter.  Including the cryptic title.  Colt is a solid entry into the hard boiled PI school, even though he may wear shorts and spend long days fishing.  He has a serious set of rules, so serious he often quotes them and lives by them, a tried and true proof that he’s cast in a classic light.  But he’s also not Superman.  The plane crash in his past, Colt encounters enough problems in his present life to send most men spiraling into a bottle never to float to the top again.  But he barrels on, putting clues together in a solid whydunit, and taking on the police, pimps, wealthy doctors, and a Nazi like religious group to boot.
The only problem I had with ‘Pocket 47’ and it’s one that is minor overall, is that it really could have been two books.   There’s a point in the tale where for the most part all seems resolved and it could easily be the end of the tale and yet it’s not.  By the end of the book, it’s obvious how it all ties together, but it did get slightly disjointed before it roared on to its more than satisfying ending.
FOUR OUT OF FIVE TIPS OF THE HAT- ‘Pocket 47’ is a welcome addition to my PI shelf and Nicholas Colt is definitely a character that needs to play his way into another novel….or five.