Quest of Drawers: How to be a convention sketch collector

The New York Comic-Con is just a few days away, and I’m packing up my necessities in my bag, along with my towel, and preparing for the show. Above all else, above my new Nintendo 3DS XL to score more SpotPass friends, above the mobile hotspot so I can post all those awesome cosplay pics,  above it all, is Norbert and my sketchbook. I’m a convention sketch collector. 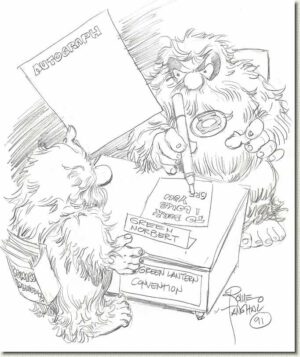 Norbert at the Green Lantern Convention by Romeo Tanghal

Under the name The International Norbert Conspiracy, I’ve been collecting sketches of my mascot for over twenty years now, and I’m approaching five hundred sketches. The question I get asked the most often (aside from the obvious “What is WRONG with you?”) is “How do you get so many?”

There’s always someone heading to their first convention, and keen on scoring sketches. And they ask the hive mind where to start, who’s the best, how much do they cost, all the standard questions. And since I’ve been meaning to do this for some time now, here’s a run-down of some basic tips to get started.

First, a few basics. There’s a few ground rules you’ll need to keep in mind when you’re trying to get sketches from the happy helpful people at a convention. Even if it looks like OTHERS aren’t following those rules, follow them anyway. Usually, the artist will recognize it, and appreciate it, hopefully lighten their mood, and you may get a better sketch out of it.

BE PATIENT – The larger a con, the longer the lines. People are getting books signed, some others are also getting sketches, and some just want to get a minute or so to talk with someone whose art they like so much. And if they got on the line before you did, they get to go FIRST. And they get to take as long as the want. Usually, the artist will grasp there’s a line, and try to keep such interactions brief; not because he’s rude, but because he wants to make sure he gets to everybody. But if he doesn’t, don’t remind him. Don’t sigh, don’t make a show of looking at your watch, and don’t do that “wind it up” thing with your fingers. You will get there when you get there.

BE POLITE – OK, you’re talking with the artist now. Remember how much you hated that guy who was taking All That Goddamn Time with the artist? That’s YOU now, to the guy behind you, and so on. So even though it seemed like everybody else was taking forever, that does not give you license to do the same, and maybe a little more. If everyone followed that rule, the last person in line would be able to go full-term in a pregnancy by the time they get to the front of the line. If EVERYbody’s just a LITTLE polite, things go faster.

BE REASONABLE – Again, bear in mind there are people behind you. If you ask for a drawing of the entire Justice League, from every iteration, fighting the total population of Topeka, be prepared to hear there’s not enough time to do so. Be prepared to be happy with a headsketch, or a simple figure.

BE PREPARED TO PAY – This is something which has become more commonplace in recent years, for a number of reasons. First off, the vast majority of artists pay their own way to come to the show, and hope to make enough money at their table to cover their expenses, and then some in a perfect world. Hard to deny them that.

In the case of more popular or “Hot” artists, there is more than a small chance that the sketches they’re doing will end up on eBay as early as that night, making the seller quite a pretty penny. There’s nary an artist who hasn’t got a story of doing a piece for someone who swore it was for their kid, who was either sick, couldn’t make the show or some sob story, only to see the art up for auction before the weekend is out. So the prevailing mindset has become similar to that of the sports memorabilia business; “this guy’s probably gonna sell this, so I might as well get my cut”. And again, it’s a hard argument to dispute, as sadly, the odds are in greed’s favor. So in the case of more and more of the bigger artists, free sketches are harder to come by. They’re not impossible (tips to follow), but if you really want a piece by your favorite artist, assume it will cost you some money.

There’s an upside to this as well, If you’re paying, you have a bit more say in what he will draw for you, and you almost certainly will get a more detailed drawing than if you just got a quickie “con-sketch”. Some artists have started taking orders for commissions BEFORE major conventions as well. Check their Facebook, Twitter or other social network feeds and see; don’t be afraid to ask, either. That’s often a win-win situation as well – the artist can see some money before the show, can complete the piece more at hie leisure, and you’ll get it as soon as you walk up to him. Likewise, some will arrange to ship you the piece after the show. If you’re asking for a very intricate piece, don’t rule that out either.

Check the publishers’ signing schedules. At a big show, the publishers will have a steady stream of creators at their booths, signing and almost always sketching. While the artist is on his own at his table, he’s on the company’s clock at the booth. They’ll certainly be quick little pieces, but if that’s all you’re looking for, that’s perfect.

Get a sketchbook. A sketch on a piece of comic art board is easy to turn over to another person. But a bound sketchbook is a subtle sign that this is a piece you intend to keep. While it may not melt the creator’s heart, at least he won’t be grumbling to himself how much he thinks you’ll get for the drawing.

Bring reference. If you want a piece of Batman or Superman, odds are peple know how to draw them. But if your favorite character is less off the A-list…well, don’t be offended if they don’t remember how many frogs and buttons are on Sonar’s jacket (it’s four). Bring a couple pictures they can use as reference.

Try a theme sketchbook – The more fun you can make your collection, the more interested you’ll get the artist. Ive seem books with just drawings of one character, some with them all doing something in particular, and one wonderful collection of heroes draw in the style of Fisher-Price Little People. Make it something they’ve never drawn before, something that’l; interest them, get the creative juices flowing.

Troll artists’ alley. No, don’t go up and insult everyone, slow down and look at all those up-and-coming creators who are pushing their self-produced books. Say hi to the guys and gals who did one issue of a DC or Marvel title a year or two ago. There’s a lot of talent there and you’ve got no way of knowing who the fickle finger of fandom will touch next. A year later, they might have a line across the floor, and you’ll be kicking yourself for not getting them when you coulda.

Try, try again. Aside from a handful of artists who have simply been too busy to do a sketch, I’ve got a few who have actively refused to draw Norbert. In the first case, the time will come that they WILL have time; if not at this show, then another one. In the second case, unless there’s some specific reason they don’t want to deal with you, like you threw up on their shoes or something, there’s no harm in asking again another time. Maybe they were tired, or in a rotten mood. Give it another shot. If you need to, buy them new shoes.

As with everything at a convention, the goal is to have fun, without in some way ruining someone else’s. A bit of patience and decorum, matched with a good attitude, and you can have a nice time and get a fun new hobby started.