REVIEW: The Art of Daniel Clowes 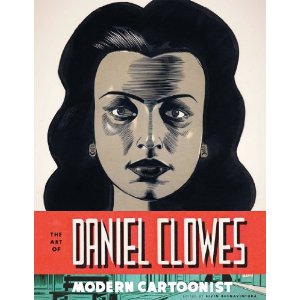 The world appears to have caught up with Daniel Clowes, the artist who looks at the ordinary and conveys that feeling of loneliness and cluelessness so many of us feel on a daily basis. When he grew up, just three years behind me, he saw the pop art era in a vastly different way, an artist’s way I suppose. He had an unremarkable childhood and was trained at the Pratt Institute, graduating in 1984. He desperately wanted to find a commercial art job.

“I was trying to get work as an illustrator in the ’80s, but no art directors actually ever called, which is what led me to throw up my hands in despair and slink back to comics. Originally, I was hoping to find a writer to collaborate with, since I was much more interested in the drawing part of the equation, but that didn’t work out. And so I began writing my own stories. I didn’t really intend to write ‘personal narratives,’ but somehow that’s what happened,” he told The Atlantic.

And thank goodness for that. The artist’s work is being celebrated this month, first with the release of the monograph The Art of Daniel Clowes. On April 12, the Oakland Museum of California opened “Modern Cartoonist: The Art of Daniel Clowes” which was organized by Susan Miller and René de Guzman. As a result, he has been interviewed and profiled from the mainstream press with regularity.

Clowes amused himself in 1984 with Lloyd Llewellyn, which he managed to sell to Fantagraphics. The title didn’t see print for two years and while he sought a fulltime position he freelanced, notably illustrating “The Uggly Family” for Cracked. As time passed, though, it was clear his idiosyncratic and hard to pin style wasn’t going to get him hired. Instead, he found himself making a living as a comic book artist, telling his stories, his way. This resulted in the anthology Eightball which has won every major industry award and gave us numerous features that have been collected. One such serial became Ghost World, which Clowes adapted with director Terry Zwigoff as an indie film in 2000 (giving us a young Thora Birch and Scarlet Johansson).

Not that he’s sold out to The Man, but Clowes has also done artwork for twenty CDs and commercial work for Coca-Cola’s failed OK soda. He’s produced a one-sheet for Todd Solondz’s Happiness and DVD covers for a trio of Samuel Fuller films. 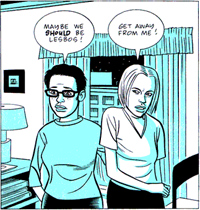 Still, it’s his inventive and captivating work in graphic storytelling that led to the book and exhibit. In 2007, he launched a twenty-part serial for The New York Times, Miser Wonderful, which was his idea of a romantic story which has since been collected and lauded. While his father lay dying, Clowes filled a sketchbook with notes that became his mostly work, Wilson, which was published in 2010 and is now being adapted for film by Alexander Payne. That story, about the lost adult, is drawn in a wide variety of styles, aping the comic strips he read as a kid to experimenting with his own work. There’s a command to his page construction and line work that keeps his pages fresh and always interesting.

Alvin Buenaventura, the book’s editor, opens the volume with a lengthy interview that gets the artist to open up on topics he’s barely discussed in the past including the two years he lost to heat disease. Only after a seven hour operation, a year after his son Charlie was born, was Clowes finally feeling energetic to return to the drawing board.

The 9.25” x 12” book is copiously illustrated from across the man’s career and is nicely designed by Jonathan Bennett. Accompanying the art and interview are critical essays by Miller, Ken Parille, Ray Pride, Chris Ware, and the ubiquitous Chip Kidd.   Overall, I gained a new appreciation for Clowes’ versatility and vitality as a storyteller and observer of our mundane lives. Familiar with his work or not, you can learn a lot about the breadth of graphic storytelling by studying his illustrations and reading the analysis that enriches the work.