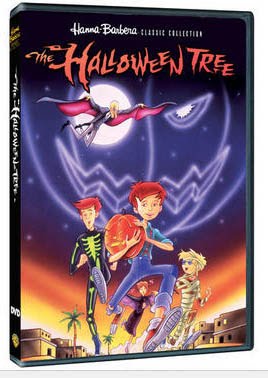 When a literary giant dies, there’s a rush to rediscover the author’s works, delighting in old favorites or finally reading a work you have somehow missed. The passing of Ray Bradbury has prompted such a journey in print and in other media. Warner Archive, to their credit, has just released The Halloween Tree, the 1993 animated adaptation of his 1972 fantasy.

The 90-minute feature was adapted by Bradbury and directed by Mario Piluso, featuring the voices of Leonard Nimoy, Annie Barker, Darleen Carr, Lindsay Crouse, Alex Greenwald, and Bradbury himself as the narrator.

A small group of four children are out trick-or-treating one Halloween when one of them, Pip, goes missing. Checking his house, they learn he has been rushed off for an emergency appendectomy. Instead of  making their rounds without him, they determine to visit him instead at the hospital. Instead, they wander off their intended path and get lost. They then encounter Mr. Moundshroud (Nimoy) who explains he’s after Pip’s ghost and refuses to help the children since they are woefully ignorant of the true meaning behind Halloween. If they can keep up with him and his giant kite, they can accompany him and suddenly, they are taken 4000 years into the past. The bulk of the tale explores the Egyptian Book of the Dead, stop by Notre Dame Cathedral and its gargoyles followed by a trip to Mexico and their Day of the Dead, which is also where they finally catch up to Pip.

The animation design is adequate if uninspired but it does convey a nice sense of atmosphere, aided by the vocal cast, which does a nice job. Overall, this is something that should be in regular rotation alongside the annual Peanuts special so people can delight in Bradbury’s work and learn a little something, too. Rather than hope it gets rerun on the Cartoon Network, you might want to get this for your home collection.

You should seek out the 2005 edition of the book which has the “author’s preferred text” along with the screen adaptation script.