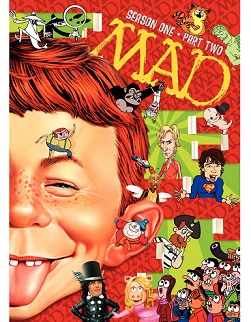 Mad Magazine worked in the 1950s when it debuted because it was subversive in its own way. At a time when conformity was the ideal, Mad went out of its way to skewer that very conformity, poking at the pop culture icons of the day, from its comic book brethren to movies and the nascent field of television. But it was smart humor, written and illustrated by some of the greatest talents working in the field. Its shift to black and white magazine was a desperate move at the time, avoiding the coming of the Comics Code Authority, but it also let the magazine grow in scope and influence. Being skewered by Mad’s usual gang of idiots was a badge of honor, usually proudly worn.

With time, the magazine became stuck in a pattern while the world around it changed and only offers up occasional bursts of brilliance these days. Still, it remains a cultural touchstone and spawned a long-running late-night sketch show that bore little resemblance to the magazine. More successful was the animated version of Mad, produced by Warner Bros. Animation for its sister division, Cartoon Network. Made up of eleven minute shorts, it has relied heavily on only parody since its September 2010 debut. Other carryovers from the magazine have included Spy vs. Spy and some of Don Martin’s cartoon panels coming to life.

Recently, Warner Home Video released Mad Season One, Part Two, containing thirteen episodes of the show, which ran between February and June 2011. The parodies range from kid-oriented shows like Pokemon to older-oriented offerings including The Social Network (The Social Netjerk). Sometimes, the titles are funnier than the episodes themselves, especially Smallville: Turn Off The Clark. You wonder if some of the audience watching gets that Law & Ogre is Law & Order?

While the parodies tend to be smirk inducing to laugh out loud funny, they are only a small piece of what Mad is all about and it’s a shame that some of the mainstream social mores the magazine was brilliant at puncturing is totally absent here. There was an edge and bite to the mag at its best but all a new generation is learning is that everything they watch, read, and hear is ripe for parody. I think they knew that.

The quality of the animation is fine but the eleven minute structure needs to be more flexible so the jokes are made and we move on. Interstitials, like the Sergio Aragones margin pieces, would have been nice to have to connect everything.

The only bonus you get on the disc is a Mad digital comic which proves to be funnier than some of the installments themselves.