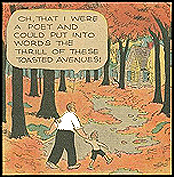 The sunshine is warm, but the air carries a tiny bite of chill. The trees are still green, except for a pioneering dogwood in the front yard, which is in the process of color changing. And our teacher friends are back at work. So is fall about to glorify the geography? Indeed.

What are we waiting for? Bundle the crowd into the car and let’s go down to he Chevy dealer’s to inspect next year’s models and after that we can go to the Ford dealer and we’ll still have time to visit the Chrysler showroom before supper. Then maybe we can stop at the soda fountain for a malt and wonder if the St. Louis Browns will ever climb out of the American League cellar…

Oooops. Time warp. I’ve been revisiting my childhood. The debut of new cars is no big event, not anymore. Oh, savvy shoppers may be aware that September is a good month to hunt the elusive bargain, but there’s not much hoopla attached to auto shopping, no balloons, no clowns, no big red signs. (The Edsel Is Here!!!) New sleds are just something that happens.

Same with television. Sure, (like a lot of you?) I scan the TV listings and make a mental note of premiers of shows I might want to sample. If we again time warp, we’ll see an era when the three networks (not counting the occasional wannabe) presented their wares pretty much simultaneously in early autumn like the car guys, and it was pretty darn stimulating to meet the folks who would keep is entertained while the snow fell. But with the coming of King Cable, shows pop up throughout the year, and some of our favorites are limited series that run in the summer. (Has anything recent been better than Newsroom?)

In the land of comics, back when comics cost maybe fifteen cents, the big moments tended to be in early summer when the oversize publications known as “annuals” graced the newsstands because, the wisdom went, readers weren’t busy during the warm months and had more time, and maybe more disposable income, for the funny books. At summer’s end, well… we got the things out and expected a slight dip in circulation. Later, when hardcover graphic novels became a factor, we had to have them almost done by September because, again nodding to conventional wisdom, we had to have the in stores by Thanksgiving to catch customers who might want them for Christmas gifts. If they weren’t ready for the printer by October, trouble was looming. In any case, autumn equaled doldrums.

I’d better quit blathering because I’ve got to get this to Mike so I can free the evening for television watching and… wait! What’s this? An unfamiliar vehicle in my driveway? What has that wife of mine been up to?

RECOMMENDED VIEWING: When Mike Gold and I initiated the Recommended Reading feature in The Question, lo those many years ago, most of my good information came from books. That’s less true now. So instead of recommending a book, let me direct you to a movie which you can rent from Netflix: Carbon Nation. Everyone should see this.