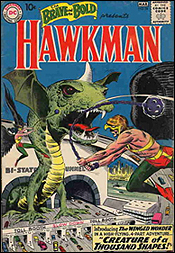 One of the hardest questions for me to answer begins with the phrase “What is your favorite…?”

My Top 10 movie list has over 100 movies on it. My Top 10 television shows list must first be categorized: is it fair to compare Rocky and Bullwinkle to The Prisoner? Well, maybe that’s a bad example, but I think you get my point. If you were to ask me to name my favorite musician, I’d go into a fugue state and you’d get scared and leave.

As we reported, Joe died Sunday evening. It was one of those moments when time… simply… stopped. For the past decade I’ve been in amazement that Joe was still giving us a graphic novel and a mini-series or special or something every year. Jeez, if I make it to 85 (and I’m nowhere in as good a shape as Joe was) I’m planning on lying there bitching until somebody changes my Depends. Joe was still at it, producing great stuff.

I was fortunate to know both Joe and his wife Muriel (predeceased by four years); Muriel knew the depths of my affection for her husband’s work, Joe knew it as well and was quite gracious but, as to be expected from an artist of his caliber, I could tell he wasn’t connecting with my praise for something he had finished months ago. He already was on to the next thing. Or maybe the one after that.

When I first started working at DC Comics back in 1976, my office was two doors down from Julius Schwartz. Denny O’Neil had the office next to me. Joe Orlando – Joe Orlando! – was a few doors down from that. And, three days a week, there was Joe Kubert. The best of the best.

I was a 26 year-old fanboy and if I wasn’t breathing I would have thought I had gone to heaven.

Kubert had been my favorite comics creator since the day my mother bought me Brave and the Bold #34, cover-dated February-March 1961. It featured the debut of the silver age Hawkman. We were getting on Chicago’s L, headed towards the Loop for my first visit to the eye doctor. I was anxious to read the comic; it looked really cool. Exciting. Different. And new superheroes were few and far between in those days of buggy whips and gas lamps.

Of course, my eye doctor did what eye doctors do: she put those serious drops in my eyes and everything got all blurry and then she exiled me to the outer office while my pupils dilated to the size of manhole covers. I was told to sit there quietly for an hour. I was ten years old; the concept of “sitting quietly” was well beyond my understanding. Certainly, not with that awesome-looking comic book on my lap.

I tried to read it. My mother started to scream about how I’d permanently ruin my eyes. She was supportive of my reading comics, she just had odd theories about how I’d go blind. Being me, I continued to try to read the Hawkman debut but now more defiantly, with purpose and determination – despite the fact that each panel was more blurry than the previous. I went through that book several times, trying my damnedest to understand it. To see it.

The book was astonishingly great – a tribute to writer Gardner Fox and editor Julie Schwartz as well as to Joe. After I finally read the comic in focus, it was clear to me that it was worth all the effort. That’s probably what made me a Joe Kubert fan.

By 1976 I had learned first-hand that a lot of the public figures I admired weren’t really worthy of such tribute on a personal level; if you were going to meet a lot of celebrities, you had to learn how to divorce yourself from the person and remain married to that person’s work. This is a lot less the case in the comics field, I’m happy to report.

And it most certainly was not the case with Joe Kubert. We could be diametrically opposed on certain political and social issues, and we were, but it didn’t matter one bit. Part of that came from Joe’s upbringing in the Talmudic arts where discussion and debate is encouraged and honored. But most of that came from Joe’s simply being a great, great guy.

That’s what I have to say about Joe Kubert. He was a great, great guy.

Here’s what I have to say to Joe Kubert.