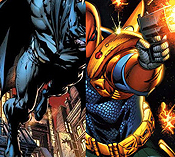 In case you don’t follow the Twitterverse, allow me to succinctly sum up the “happening” that occurred this past week. Rob Liefeld, stalwart artist and writer, melted down. After months of being jerked around by his nebbishy editor, he waved the white flag and left his position at DC. He took to Twitter to vent a bit. Creators around the industry came to bat for the editor he trashed. He lashed back. First to Marvel’s First Hat Honcho, Tom Brevoort. Then, Scott Snyder, in a private communication, reached out to the champion of anatomy himself. After a bit of back and forth, the private conversation became not-so-private. Seems Liefeld took it upon himself to imply that Scott’s success at DC lies with the character Snyder writes, not his prowess of prose.

I could actually argue on the side of Robbie Jordache about the editorial mandate issue. Seriously. It’d be brilliantly positive. The single time in my life I wouldn’t take every chance I get to dump pot shot after pot shot on the man whose most famous creation is the thigh pouch. This however, is not that sunshiny post. Rob? You done went and got me pissed.

The tweets in question:

“It’s not you (referring to Snyder). It never has been. It’s Batman.”

“I’d like to think that if your going to wave your ego around on Batman you’d remember all that came before you. Holeee crap.”

Where do I even begin? OK, Rob, if you’re paying attention (which shouldn’t be hard since you’ve got an abundance of free time right now…), here’s the skinny: Scott Snyder’s Batman is selling amazingly, well, because he’s writing it brilliantly. Yes, Batman will sell tons of books because he’s in it. Certainly all the other Bat-titles being produced right now are enjoying that fact; they’re not as good (save perhaps for Batman Incorporated). Snyder’s run, first for a year on Detective, and now on Batman’s flagship title, has proven time and again what a talent Scott happens to be. For one year, he thrust Dick Grayson into the cowl, and delivered a series I personally hold up as being one of the most deftly written in the last decade. And when he transitioned to the main book? He created an original epic story and villain (in the entire Court of Owls) that takes all the gravitas Hush falsely earned, and did it without relying on the crutch of every single rogue in the Bat-gallery. To imply that the consistent sales Snyder’s run is bringing in is due to the nameplate alone is not only short-sighted… it’s insulting to me as a fan.

Rob’s next pec-pulsating punch to the gut implies that Snyder takes credit for his success without denoting all those great creators that came before him. Given Liefeld’s inability to draw a straight line, a proper foot, or a plausible gun has perhaps caused him to not be able to read. Because when I read Snyder’s run on Detective Comics, I saw that he brought back James Gordon Jr, a character who‘d long been forgotten since his introduction in Frank Miller’s acclaimed “Batman: Year One.” And in his tenure as Bat-plotter, Snyder has paid homage to nearly every other writer before him, including working with Grant Morrison to tie-in several pieces of “The Return of Bruce Wayne” with his “Gates of Gotham.”

If Rob’s beef was that Snyder took credit for the work he’s done? Well, that steak ain’t for dinner. Snyder is allowed to revel in his limelight. He’s earned it. And while Rob’s runs on several books saw increases in sales… it seems it wasn’t enough for the powers that be. And so, we end up in this one-sided squabble.

Snyder’s ultimate response to the fans: “…I’ll echo what my brother @GregCapullo said before. All of us on team Batman are extremely proud of the success, and that success is due to your support. But as the team on the book, if we didn’t believe that your incredible and humbling support was due at least a little to us doing a somewhat decent job – if we sat back and said – Batman sells Batman – what sort of book would that engender? We have to think the sales are because you guys like what we’re doing on the book. It fuels us to continue to do stories that matter to us, knowing that you’re telling us you like what we’re giving you, on a character that means everything to us both. That’s it. I will not fight or post another negative tweet about Rob or anyone. And, I want to say sorry to you all and no one else– to you, the fans of comics, not just me or Rob – for bothering with this. It’s a waste and we should be pushing the good not attacking each other. And I’m guilty of that too. So I’m sorry to you for going negative. Thx to those of you who reminded me of that.”

See? Snyder certainly isn’t waving his ego around now, is he?

And let’s not leave the table before we discuss Haunt versus Swamp Thing. First off, I tried Googling to see where or how Liefeld is tied to Haunt. Couldn’t find one. But suffice to say, even if he had anything to do with it, I’ve read it. It doesn’t hold a candle to Swamp Thing. And again, I cite the books themselves to combat this idea that “all creations aren’t equal.” Well, Robbie? You’re damned right. All creations are not created equal. Swamp Thing has decades of material from which to draw from. To expect Haunt would be on the same level is asinine. And for the record, I didn’t give two poops about Swamp Thing before Snyder was on it. And I say this knowing full well Alan Moore wrote the character. Snyder’s prose and ability to craft truly creepy tales helped Swamp Thing rise to the top of my pull list every month. I got through two issues of Haunt. And the second one was read during a long night in the loo, where no other reading was available, and my phone was dead. I’ll leave it at that.

At the end of the day, I want to give Liefeld a pass. I really do. He was exasperated, like so many others these days, at DC’s whirlwind editor machine. Since the New 52, it would seem that unless you’re on the top of the heap in sales, the Brothers Warner are pushing down on the middle management to keep shaking the tree until money falls out. By doing this though, it inevitably leads to creator burn out. And through the lens of his exasperated state, Rob lashed out at those defending the editor in question. What good did it do you, Rob? Where you could have once just waved that white flag and retreated back to the land of your creator-owned crud, you instead decided to pick a fight with Batman.

And Robbie, in case you never got the memo: Don’t ever pick a fight with Batman.