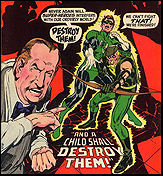 History happens every day. Every day changes the world.

Usually, the battles get written down. We measure time in wars. The more death, the more important.

And yet, that’s not all there is to history. There are births and marriages and medical advances that allow women to give birth without dying from infections. There are music and art and dance. There are comic books and television shows and movies.

When I was a young history major in college (back when there was waaaay less history), some of the more interesting discussions we had were about how one defined history at all. It is a study of the past, of course, but what kind of study?

The field is enormous, of course, and allows all kinds of views. The one that most interests me is the question of how people lived their lives in other times and other places.

This week, on AMC’s award-winning Mad Men, the story centered around an historical event that I actually remember, the assassination of Dr. Martin Luther King, Jr. I was in high school at the time, my freshman year at boarding school in Connecticut, and mostly what I remember is feeling horrified (MLK inspired my early pacifism) and frustrated, because there was no way to find out what was going on up on that mountain.

The Mad Men cast had lots of reactions. Some were upset, some were scared for themselves, friends and family. Some were annoyed that events upstaged their plans. Some were awkward around the (very) few black people they knew. I believe all the reactions were authentic recreations of what people in that particular demographic niche felt at the time, although I’m not sure the proportions are correct. Still, it is history the way I like to see it, happening to people in real time.

There are lots of parallel stories in comics. The most famous is probably our own Denny O’Neil’s run on Green Lantern/Green Arrow, written about the real world, using super-heroes to articulate some of the different points of view in the day’s arguments. Another of my personal favorites is this story, in which Superman trusts President Kennedy with his secret identity. I read that comic when I was ten years old, and President Kennedy had just been shot.

It’s hard to imagine a story like this today, when things are so hyper-partisan. Looking at it now, I have an understanding of how different our national discourse was 50 years ago.

Another little bit of history that happened this week is the return of All My Children, now on the Internet (and also One Life to Live, but I don’t watch that). I don’t know how anyone can keep historical records in Pine Valley, when time doesn’t seem to move in a straight line. Apparently, five years have passed since we last saw our cast, but some characters are the same age, while some are a decade older. Just a few episodes in, and it’s thrilling how much I don’t care.

And the great philosopher, Howard Chaykin said, “Continuity is for geeks.”