It’s all fun and games until someone loses a…well, anyway.

This week, as a run-up to the season premiere of Doctor Who, a mini web-series titled “Pond Life”, intended to share a look at the Ponds’ home life in between visits by The Doctor. It was four episodes of entertaining fun, right up until the moment Steven Moffat and writer Chris Chibnall seized our hearts, turned them sideways, and made a tasty broth from our tears.

Each episode summarizes a month between April and August, leading into the events of the first episode, Asylum of the Daleks. All five episodes of “Pond Life” are available on the BBC YouTube channel, mirrored on numerous websites, and is written into the sullen expressions of Who-fen everywhere. Take a look, then we’ll discuss:

In April we get the distinct impression that The Doctor has been keeping in touch quite closely with the Ponds via a series of phone messages. He relates a few of his solo adventures, including surfing the Fire Falls of Florial 9 to escape a cohort of his old enemies the Sontarans. He also met “Good little dancer, terrible spy” Mata Hari, and performed backing tracks for one of those hip-hop songs the kids seem to like. 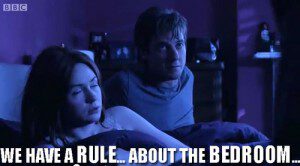 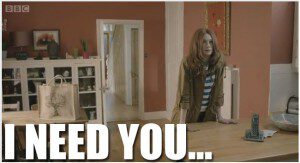 May is in fact the only time The Doctor and The Ponds directly meet in all five episodes. He bursts into their bedroom, begging them to get dressed, only to realize he’s arrived earlier than he expected, and they’ve no idea what he’s talking about. As flashes of the events to come in the series flash across the screen, he assures them that all is well, the future is “really, really…fine”, and bids them return to sleep.

June and July is a bit of a two-part story – The Doctor has picked up a stray Ood who is still under his conditioning as a servant. Apparently wandering off the TARDIS during a stop at their apartment, and sits waiting in their bathroom for orders. The Doctor assures them the best thing to do is let him follow his conditioning, resulting in the Ponds getting a butler for a brief time.

The Doctor’s popped by to pick the Ood up and return him to Ood-Sphere in between July and the final chapter, assumed to be August, though the date is not specifically mentioned. It’s clearly a bit longer than that, as quite a bit has happened to Amy and Rory. Unaware to The Doctor, Amy and Rory have had a falling out, and we see Rory leaving their home carrying his belongings in a trash bag. And is you look at Amy’s lips, she’s NOT saying “Come back”.

So, quite a bit going on here, lots of fun, some tears and worry – in short, a solid Doctor Who episode.

The Sontarans were introduced in the Jon Pertwee adventures The Time Warrior. A militaristic clone race, they’ve cut swaths across the galaxy, either via simple conquering raids, or as part of their protracted war with their enemy, the Rutans. They were the race behind the invasion of Gallifrey in The Invasion of Time, and almost converted the Earth’s atmosphere to suit them on The Sontaran Stratagem. Christopher Ryan, best known to Americans as Mike “The Cool person” from the punk Britcom classic The Young Ones has appeared twice as two different Sontaran leaders.

The Ood first appeared more recently, in the Tennant adventures The Impossible Planet / The Satan Pit. They were portrayed as a servant race, seemingly low in intelligence, communicating via an implanted communication device. In their next appearance Planet of the Ood, it was revealed their situation was far more insidious. Ood are indeed sentient and intelligent, and are born with a second, exterior brain that they use to communicate telepathically to each other, selected people outside their race, and the physical Ood hive mind. This second brain is amputated as part of their “conditioning” process, which severs their link to the hive mind, and effectively lobotomizes them. The Doctor is horrified at the news, and helps to free them from their captivity. Their de facto leader, Ood Sigma, the first conditioned Ood to re-connect to the hive mind, returns to guide The Doctor through his final adventures before his regeneration. An Ood was found on The Junkyard at the End of the Universe in Neil Gaiman’s The Doctor’s Wife, but only because there wasn’t enough in the budget to created the alien Neil had written into the script.

The Ood bear more then a small resemblance to the Hartnell-era aliens The Sensorites, from an adventure of the same name. show runner Russell T. Davies noticed that, and as a tip of the hat, placed their homewold, Ood-Sphere in the same star system as Sense-Sphere, homeworld of the first race.

When Harry Sullivan (accidentally) touched the Helmic Regulator, the TARDIS landed on Nerva Beacon instead of the moon, back in The Ark In Space.

The Doctor made special mention of it again when showing Martha Jones how he prepared the TARDIS for takeoff in Smith and Jones. In the new design (desktop setting) of that console, it resembles a bicycle pump. He was also able to use it, in concert with the thermo-buffer and the zeiton crystals, to prevent a two-Doctor paradox from blowing a hole in the universe the size of Belgium in the mini-adventure Time Crash.

While the Helmic regulator still exists on the new design of the TARDIS, it’s not yet been pointed out specifically on the show.

Interesting fact – the TARDIS console on the set has a user’s manual. The controls on each panel are specifically named, and each has a specific function. Matt Smith was given the manual and had to learn it. He had to learn a precise series of actions to launch or pilot the capsule “properly”. He’s not just making it up.

Doctor Who premieres September 1st on the BBC and BBC America.