Martha Thomases: Don’t Try To Dig What We All Say 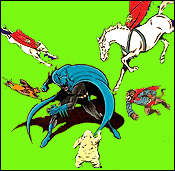 In my daily perusing of the Internets, I came across this post. A short post, it says (with one little snip):

“Dear Old People (and this includes me), the kids today are not hip to your cultural references. This is not a failure of education. Things change. The end.”

It’s not about comics or the movies or television. If anything it’s about Baby Boomers and how insufferable we can be. The popular art that moved us must move you, or you’re ignorant.

This is not a new attitude. My mother, for example, loved E. Nesbitt and J. D. Salinger, so she thought I should read them. My high school English teacher thought that Fitzgerald and Hemingway were the greatest writers of the 20th Century, and skewed their curricula accordingly.

None of this was as insufferable as my generation has been.

In Hollywood, my generation has minded the television shows of our youth into (for the most part) wretched movies. Car 54, Where Are You?, which was an entertaining glimpse of the 1950s Bronx, was made into a terrible movie that abused my beloved David Johansen. See also: McHale’s Navy (here and here), I Spy (here and here), and more. Exception: The Addams Family was genius, and so was equally transgressive movie.

We also made smug jokes. Do you know Paul McCartney was in a band before Wings? These days, if someone tells that joke, that person must explain what Wings was.

In comics, the insidious influence of the Boomers is even worse. Every attempt to reboot a character for a modern audience is eventually derailed by continuity geeks who insist that everything fall in line with the way it was when they were kids. Sometimes, I’m like this myself. I liked the Supergirl who hid her robot in a tree. I liked super pets. I think they made the world a better place.

You know what else made the world a better place? Me, being young and cute and hopeful.

We need to get over ourselves. The Flash doesn’t have to be Barry Allen (that re-reboot robbed my adult son of the Flash he grew up with). Superman doesn’t have to be in love with Lois Lane, nor Peter Parker with either Mary Jane or Gwen Stacy. Those stories exist, and we can read them whenever we like.

In the meantime, there’s lots of terrific new entertainment that us old farts could learn from. Off the top of my head, there’s Sherlock, a brilliant new way to look at a classic character. There’s Copper on BBC America, a blueprint for the way the GOP wants to rebuild American society. There’s Cosmopolis, a movie that analyzes modern life from the interior of a stretch limo. And, love him or hate him, Mark Millar is taking major risks as he creates his media empire.

Now, excuse me. I have to go and watch Nashville again.