THE BAT IS BACK!
Airship 27 Productions is super thrilled to announce the release of BLACK BAT MYSTERY, Vol Two. This is the second in their anthology series featuring all brand new adventures of one of pulpdom’s most loved heroes, the Black Bat! 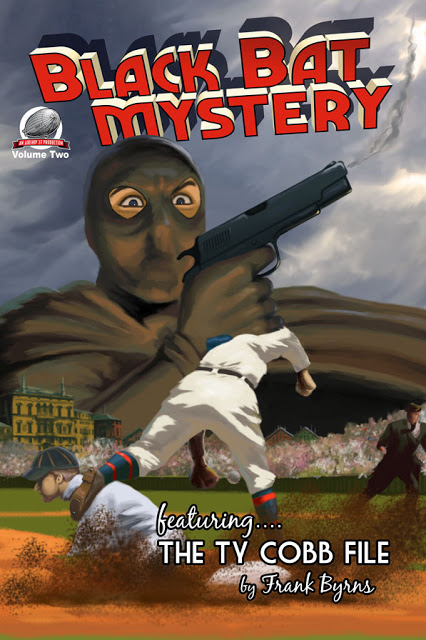 Crusading Attorney Anthony Quinn believed his career was over when a criminal threw acid into his face blinding him. Months later, desperate to regain his sight, Quinn underwent a unique transplant operation which gave him the eyes of a slain lawman. Not only did the procedure work, but it also gave Quinn the ability to see in the dark.  Using this fantastic gift, he created the Black Bat, a justice seeking vigilante able to battle those villains beyond the reach of the law. Aided by his team of loyal crime-fighters, Carol Baldwin, Silk Kerby and Butch O’Leary, the Black Bat is once again on the prowl, his target, the depraved and evil denizens of his beloved city.
“This new collection of stories are so much fun,” stated Managing Editor, Ron Fortier.  “We knew after the success of Volume One, we needed to really find other unique and original stories that our readers would appreciate.”  New pulp writers, Aaron Smith, Joshua Reynolds, Jim Beard and Frank Byrns offer up a deadly quartet of fast pace action thrills.  There are traditional pulp themed plots that pit the Black Bat against super human Nazis monsters and mysterious aircrafts terrorizing a small town.  But at the same time there is Frank Byrn’s yarn about corrupt politicians involved with Major League Baseball.  “The idea of using a 1930s baseball background for a Black Bat adventure was extremely exciting for us,” Fortier continued.  “And then there’s Reynolds story that has him teaming up with another classic pulp legend, Jim Anthony the Super Detective.  Now who doesn’t love a good pulp team-up?”
The book features a stunning cover by Ingrid Hardy and Rob Davis based on Byrn’s story and has gorgeous interior illustrations by Andres Labrada.  BLACK BAT MYSTERY Vol. Two is another great pulp collection from the high flying Airship 27 Productions you won’t want to miss.
AIRSHIP 27 PRODUCTIONS – PULP FICTION FOR A NEW GENERATION!
Available At
Create Space  (https://www.createspace.com/3974551)
At regular Amazon a week later.
Airship 27 Hangar as $3 Digital Download
(http://robmdavis.com/Airship27Hangar/index.airshipHangar.html)
And in two weeks at (http://indyplanet.com/) as a POD.