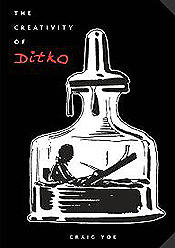 It’s only fitting that I start a review of a book about Steve Ditko by raising an ethical question. Is it proper for a critic to review a book in which he has an essay, no matter how brilliant, poignant and vital that essay might be?

I don’t care. The latest tome from YoeBooks, The Creativity of Steve Ditko is so magnificent such petty concerns such as objectivity do not matter. Anything I can do to help direct the masses towards this effort is in service to a greater cause and, besides, I don’t get royalties.

There have been a number of books about Ditko, one of America’s most important comics creators who is as reclusive as he is gifted. In fact, this one is a sequel to Yoe’s The Art of Ditko, which I haven’t read – not because I’m not in it, but because I’m a cheap bastard. Creativity runs over 200 over-sized pages and weighs over three and one-half pounds, supporting my argument for electronic publishing as I suspect the majority of its audience consists of aging baby boomers who can only keep the book on our laps for a short period before reaching for Depends. I’m hard-pressed to suggest what Yoe could have cut.

There’s tons of artwork, including lots of large reprints of Ditko’s work including many full-length reprints of sundry horror and mystery stories. Steve always said he wants his work to speak for itself; here, it doesn’t speak – it screams. Loudly. The photographs are particularly interesting, as Steve hasn’t been seen in public since roughly the time we crawled out of the sea.

As one would expect from the man who ran one of America’s foremost design studios after his stint as creative director, vice president and general manager of Jim Henson’s Muppets with enough awards, honors, yadda yadda yadda, to sink the Titanic, The Creativity of Steve Ditko is as exquisitely designed as a fifth dimensional cathedral. I particularly admire Craig’s patience: it must have taken him forever to find so many top-shelf Ditko stories from Charlton that were actually printed on-register.

I don’t know if Steve would like this book. My feeling is, probably not. He simply doesn’t like the attention, although I’m unlikely to debate the right to privacy issue with him. But whether he likes it or not, Ditko deserves that attention – and he deserves all of the effort that Craig Yoe has lavished upon him.

And those essays are great.