It’s Writing, Captain, But Not As We Know It 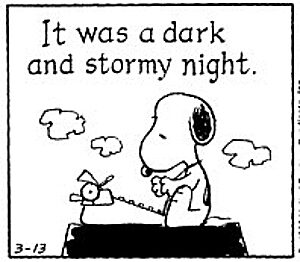 The annual running of the bad prose has come again, with the winners of the Bulwer-Lytton Fiction Contest announced Monday. (Yes, that page is apparently official, even though it looks like something that crawled out of 1996, and not before dying, either.)

In honor of the “dark and stormy night” feller, the judges of the Bulwer-Lytton contest every year choose the most lousy opening sentence they can from among a myriad entrants. This year’s winner was:

As he told her that he loved her she gazed into his eyes, wondering, as she noted the infestation of eyelash mites, the tiny deodicids burrowing into his follicles to eat the greasy sebum therein, each female laying up to 25 eggs in a single follicle, causing inflammation, whether the eyes are truly the windows of the soul; and, if so, his soul needed regrouting.

And it was extruded by one Cathy Bryant of Manchester, England.

Since there are always more bad sentences, there are also category winners. Those of genre interest are: