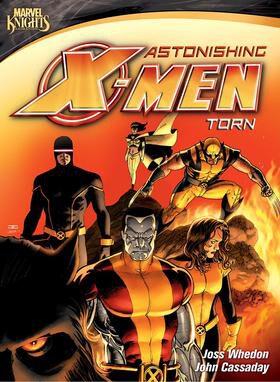 Joss Whedon’s take on the X-Men is the series that keeps on giving. Winner of the Will Eisner Award winner for Best Continuing Series, it first it became a series of motion comics, adapting the 25 issue run, and in a few weeks, it will be turned into a series of prose novel adaptations (by Peter David, due out September 5). Why? Whedon understands character, action, and using larger than life people to work as metaphors for life. Buffy the Vampire Slayer was really about surviving high school and being a mutant in the comics is dealing with prejudice and fear of the unknown. But, unlike so many others, Whedon tends to leaven his work with humor and character traits that amuse and surprise.

Astonishing X-Men was created as a showcase series for Whedon but he was accompanied by acclaimed artist John Cassaday, who brought a photorealistic style to characters that have tended to be drawn with great exaggeration by artists ever since their 1963 debut. Grounding the visuals with Whedon’s writing style made for one of those magical pairings which seems to happen with less and less regularity.

Cassaday’s visuals work wonderfully on the printed page but less so given the limitations of the motion comic format. Serialized for the web, these have been collecting in a series of DVDs from Shout! Factory and Torn is the latest installment, out this week. As noted when we reviewed Dangerous, motion comics is this weird hybrid that is really a modern day version of the cardboard cutout animation first used in Marvel Super-Heroes back in the 1960s.

Wisely, they retained as much of Cassaday’s artwork as was practical and the dialogue has that Whedon ring, although as usual the voice casting leaves something to be desired. Cassaday worked with Atomic Cartoons and Neal Adams to bring some life to his four-color efforts.

Torn adapts issues #13-18 and pits the merry mutants against the less merry Hellfire Club – featuring Xavier’s twin sister Cassandra Nova, Emma Frost, Perfection, Negasonic Teenage Warhead, and the deadly Sebastian Shaw. We learn that the enigmatic Emma Frost is conjuring up a psychic project of the villainous alliance because she was being blackmailed by Nova. Whedon also pauses to deepen Scott Summers by letting us learn of a childhood trauma that manifested in his losing control of his optic blasts.

Whedon’s affection for teen characters remains evident as it is Kitty Pryde who winds up saving the day this time.  He has some fun with the simmering Kitty/Colossus relationship, displaying some nice character-based humor. Similarly, when Emma plays mind games with the team, it mixes painful memories with humorous situations, giving us some fresh insights into the team.

The six chapters, totaling 81 minutes, are nicely adapted into animated installments and keeps the momentum moving even when the visuals are overly static. If you love this run in all its incarnations, then you want this. Or you could wait a bit and get all the motion comics series on a Blu-ray, coming later this year.