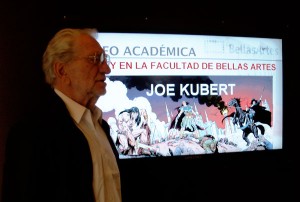 Joe Kubert’s distinct art style was one of the earliest I recall being able to identify. It seemed such a perfect fit the DC war titles and I was always pleasantly surprised to see the occasional superhero cover during the 1960s. I didn’t really get a sense of his lengthy tenure in comics until he was spotlighted in an issue of DC Special.

Then came Tarzan. I knew of the character but had not then read Burroughs or the Gold Key comics so this was an eye-popping revelation. It was my first sustained exposure to the jungle lord and Kubert’s artwork seemed an ideal fit. Thanks to DC’s expanded reprint program through the 1970s, I was exposed to more and more of his work and recognized a true artist.

In the summer of 1980, I was briefly on staff at DC prior to beginning my career at Starlog Press and I wound up spending a lot of time in Ross Andru’s office. It was small and cramped, but he sat at his drawing board working up covers or layout covers for others. At the same, all cover art was passed under his nose and it was through his tutelage that I grasped how carefully Kubert constructed his covers and he drew for color, something I had never considered before. At first I would see the artwork and wonder where the blacks were to give the cover weight but then I would see the color guide and it suddenly made sense and worked wonderfully.

Joe and I became nodding acquaintances when I finally joined DC in 1984 and he contributed pages to Who’s Who but we never did more work together and remained friendly enough. At some point, Ðìçk Giordano asked me and Mike Gold to reread the five issues that Joe had completed of The Redeemer, a project DC ballyhooed in 1983 before yanking the project for various reasons. It was a rare treat to see stuff that no one else had. Unfortunately, the conclusion was that the time for such a work had passed and it was quietly canceled and the rights returned to Joe.

I admired and respected his work and the school, which by then was feeding the comics companies’ voracious need for talent. I then learned he was doing work for overseas publishers and I really wanted to see them. Thankfully, several, such as Abraham Stone made it over here and I distinctly recall one San Diego show, I actually waited on line for something like an hour or longer to buy a copy and have the blank first page graced with a Kubert sketch. I watched as Joe made small talk with the fan as he knocked off a flawless head shot of Sgt. Rock or one of his other characters. When it was my turn, he perfunctorily opened the book, said hi and asked what I wanted then looked up. Recognizing me, he broke into a big grin and was very pleased I had waited in line. The patience was rewarded with a wonderful full figure Tarzan.

We’d see one another at cons through the years, chatting ever so briefly since he was usually surrounded by fans, friends, and other professionals he had worked with through the years. As a result, I was delighted to hear we would both be at the Grenada Convention in 2010. For several days, we would share meals and conversation, with Joe talking to me about the early days of comics and chatted with Deb about the general world. He was good natured, usually sketching when he wasn’t eating, explaining he couldn’t help himself. Despite the language barrier, he expressed his appreciation and enthusiasm for the work of artists, shyly showing the master their portfolios.

We last saw one another, the usual handshake, smile and quick “how are you?” at Baltimore Comic-Con last fall. I was looking forward to seeing him again at the show next month. And then I received the word that he had shockingly, unexpectedly, passed away yesterday after a brief illness.

Joe broke in at the beginning of his teenage years. He worked his way up, improving his craft with every passing year. Long after he retired from editing at DC and then as the work from the majors dried up, he continued to write and draw graphic novels that essentially took over from where Will Eisner left off. Look at his output over the last 20 years and it’s an incredible achievement for any creator let alone the final chapter of one man’s career. Works like Yossel and Fax from Sarajevo are must read volumes. There’s still a bunch of work out there that needs to be translated and brought here so we can enjoy fresh Kubert for a little while longer.

He rarely had a cross word for anyone, always smiling and being as encouraging as possible. His legacy is certainly one of the broadest of any creator thanks to not only the generations of graduates but his own kids, Adam and Andy, who continue to push artistic boundaries.

The likes of Joe Kubert won’t be seen again and we’re all the poorer for it.