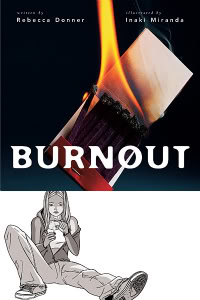 [EDITOR’S NOTE: This is the first in a series of reviews of the five books coming out from DC’s Minx imprint this year.]

There is something almost daringly simplistic about Burnout

($9.99), as the central character Danni directly narrates her own story of teenage love and angst. No surprise, then, that fire is the central imagery to the book, unapologetic flames that do nothing but burn.

The first comics work of Rebecca Donner, who’s published work in nearly every other medium, Burnout finds Danni and her mom relocating to a remote locale, a forresting town. It’s quiet, aside from the drunken shouting of her mom’s new boyfriend.

The boyfriend’s son, Haskell, is the smoldering love interest, a young man angry at the world and especially at loggers, whom he attacks with near-thoughtless contempt. As Danni falls into a crush on Haskell she also falls into his world of ecoterrorism, and Donner turns the heat up even more.

A few times, the story becomes overly cute and childish, but by and large it is a stern book, as self-serious as the teenagers it describes. That’s not meant as criticism — Donner very effectively translates the caged sensation of youth, and the struggles (often misguided) to break free.

Minx books are at their best when they speak honestly with their intended audience of adolescent girls, and while the message of Burnout isn’t a happy-go-lucky one, it is honest. For that and much more, it’s a story that lingers in the mind, like the sharp pain of a burn.

[NOTE: I recently chatted with Donner about the book over at CBR.]