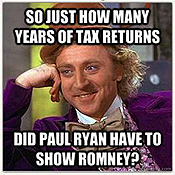 Charlie Bucket lived with his mom and his grandparents in a dirty, downtrodden industrial city that used to be a thriving center of commerce, with factories making cars and furniture and steel and zippers and paper clips. The citizens of the city were happy to work in the factories, because they were well-paid and had wonderful benefits thanks to their unions, and all their kids were able to go to college because of the money they were able to save and the national student loan program. But then all the factories moved to China and Vietnam and India and Malaysia because the CEOs of the companies who owned the factories needed more money for more corporate jets and limousines and private islands and new mansions with elevators for their cars, and the people in China and Vietnam and India and Malaysia didn’t have unions that forced the CEOs to give wonderful wages and pesky pensions and hardy health insurance to their slaves…uh, I mean, employees.

So all the factories in Charlie’s city closed – except for one, Willy Wonka’s Chocolate Factory. Charlie’s father died because he didn’t have health insurance, and Charlie and his mom got kicked out of their 3 BR, 2 BATH, RMS W/VU apartment overlooking the harbor because the Social Security money which they depended on had been privatized, and when the market crashed, there went the monthly checks for Mrs. Bucket and Charlie. They had to move to a little, tiny house that was really too small for the two of them, and then Mr. and Mrs. Bucket’s parents came to live with them because their homes were foreclosed after the mortgage securities crisis, so things were really crowded in the little house.

Charlie tried to help out by delivering newspapers, which is how the family found out that Mr. Willy Wonka, sole owner and proprietor of the one factory left in town, had hidden five Golden Tickets in the wrappings of his Wonka Bars. The five people who found the Golden Tickets would not only win a lifetime supply of Willy Wonka chocolate, but also be taken on a private tour of the factory.

Four of the tickets are bought and found by Klaus Rave, a man who looks just like the chief pig in Animal Farm; twin brothers named Donny and Cain Coke, who are very rich and give money to philanthropic organizations like Success For All Amerikans and The Birthright Society; Alice Coltrane, a girl with a sassy, big mouth known for making hilarious barbs; and a boy named Pablo Rico, who saved up all his Social Security money after his father died and used it to go to college. But he doesn’t like women too much.

There’s only one ticket left, and Charlie is sure he is going to find it. But then it is announced that an eccentric millionaire who claims to wear magic underwear bought the final ticket. His name is Mingus Wilbur Rosary.

So Charlie is among all the other onlookers as Klaus and Donny and Cain and Alice and Pablo are greeted by Willy Wonka and led inside the magical, wonderful, chocolate factory.

Inside Willy Wonka has them all sign a contract before the tour can begin. There is lots of small print on it, and everybody grumbles, but they all sign it, because Klaus and Donny and Cain and Alice and Pablo and the eccentric millionaire whose name is Mingus Wilbur Rosary really want to get inside and look around.

The factor is full of mind-blowing, mouth-watering, stomach-rumbling marvels like a real chocolate river, tasty flowers and mushrooms, and even delicious wallpaper. Wonka’s workers – considered the luckiest people in town, not only because they have a good job with benefits and a guaranteed pension, but also because they work for Willy Wonka – are all hard at worker. Willie Wonka warns his guests not to touch anything unless he says it’s okay, but Klaus and Donny and Cain and Alice and Pablo and the eccentric millionaire whose name is Mingus Wilbur Rosary ignore him, and one by one, they disappear.

Klaus gets sucked into the chocolate works, after falling into the chocolate river from which he was trying to drink. Donny turns into a giant blueberry after chewing on a piece of Three-Course Dinner Gum, which was still in the experimental stages. Cain falls down a garbage chute that is for the “bad eggs” in the Chocolate Golden Egg Sorting room. Alice opens her big mouth and makes some sassy barbs about Wonkavision television, and finds herself stuck in a TV land where there are no commercial breaks and she can’t go to the bathroom.

The eccentric millionaire whose name is Mingus Wilbur Rosary sneaks into the Bubble Room and tastes the Fizzy Lifting Drinks. He starts to float up, up, up, and is nearly whisked into an exhaust fan on the ceiling. But he starts burping to let out the fizz and floats back down to the floor.

“You can’t do this!” said Willie Wonka.

“I can, and it’s already done. Look around, Mr. Wonka.

Willy Wonka looked around. All his workers were gone, and men in black suits and dark sunglasses were supervising other men in overalls as they took down and broke apart the Chocolate Factory.