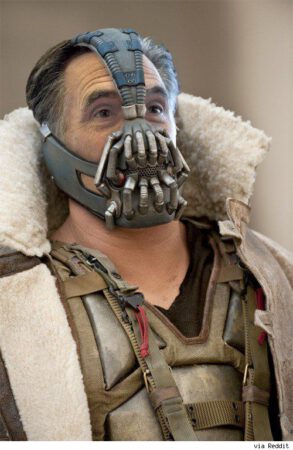 A few years ago a demonstrable moron of a moviegoer raised a brief public stink about Peter Jackson’s movie adaptation of J.R.R. Tolkien’s THE TWO TOWERS, claiming that this was a sneaky reference to 9/11 and that Jackson was clearly making light of the tragedy.

Informed that the book had existed for forty years and that it was an international cultural phenomenon before the hijackers were born, and that the title was therefore established, the fool doubled down. The existence on an unassailable timeline had no effect on him. He preferred his conspiracy theory, even if it was disproved by facts nobody could possibly counter. The conspiracy theory was more fun, more satisfying and (to him) more empowering.

So we now have Rush Limbaugh, claiming that the villain of the new Batman movie, Bane, is clearly lib’rul Hollywood’s sneaky slam at Mitt Romney, just because Romney used to work at a company called Bain.

(This is a connection made by Jon Stewart too, but Stewart, at least, knows it’s a joke.)

Okay. So forget that Bane the character has been around for years and years and years — since 1993, in fact — and that he in fact appeared in a previous Batman movie, during the Clinton Administration; you can argue that this is the kind of thing only stone geeks would know, and no doubt that argument will be made, in defense of Limbaugh’s sloppiness.

But you don’t even need that kind of specialized knowledge to tear this idiocy apart.

They require time for screenplays to be written, then rewritten; time for the cast and crew to be hired and to gather, time for the sets to be built, for the movie to be made, time for it to be scored and edited. Everybody knows this. Everybody also knows that Mitt Romney has only been the presumptive candidate for a few months. Nobody, but nobody, knew for sure that he was gonna be the guy, when the movie entered production.

Christopher Nolan, beginning to plan this final movie in his trilogy, did not suddenly have the brainstorm, “Gee! I don’t know who’s going to be the Republican nominee in 2012, but just on the OFF-CHANCE it’s Romney, two years from now, I’ll take this one Batman villain whose name is similar to a company on Romney’s resume and everybody will be so stunned by my clever political barb that they won’t vote for him!”

You discern even more stupidity when you realize that Romney’s doings at Bain have only been big-time controversial for a matter of weeks…since long after the movie was in the can. More alleged clairvoyance from Nolan.

And there’s even more than that when you take this into account: if the hero fighting Bane were Marvel’s The Black Panther — a charismatic black guy, and one LITERALLY born in Africa, who has a name of an organization that some idiots think Romney’s opponent supports — then he might have a case. But it’s Batman, a billionaire and a law unto himself. HE’S the Romney surrogate, if you have to believe that Romney has a surrogate in the movie. Thus, the metaphor Limbaugh thinks he sees doesn’t even survive simple knowledge of a character created in 1939, for crying out loud.

What gets me is that even the folks who ditto everything Limbaugh says, who might be able to spot the sheer appalling brain-dead stupidity of this particular claim, will not make the logical leap that he might have his head equally as far up his ass on some of the other things he says.

Seriously, folks: is there anybody out there who contends that this is the only time Limbaugh has just made stuff up? Or is this just the most recent, and obvious?

Adam-Troy Castro, who is best known in the comics community for his Sinister Six trilogy of Spider-Man novels, is also a well-known figure in science fiction, fantasy, and horror. His stories have been nominated for two Hugos, three Stokers, and eight Nebulas. Adam's twenty-first through twenty-sixth books will be a series of young adult novels about the adventures of a very strange young boy named Gustav Gloom, coming soon from Grosset and Dunlap. The first, GUSTAV GLOOM AND THE PEOPLE TAKER, will be out in mid-August.