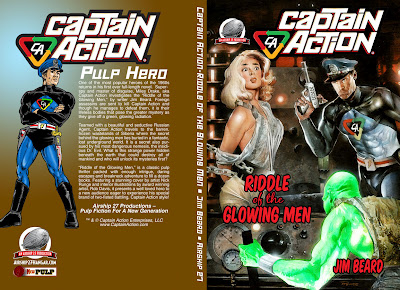 CAPTAIN ACTION – RIDDLE OF THE GLOWING MEN, the first ever Captain Action novel from Airship 27 Productions and Captain Action Enterprises, LLC is now on sale!  Written by Jim Beard, the book features a stunning cover by Nick Runge with interior illustrations and design by Rob Davis.
“Riddle of the Glowing Men,” is set in the sixties where secret agent, Miles Drake, aka, Captain Action, is attacked at A.C.T.I.O.N. headquarters by several assassins whose green skin glows as if radiated.  In the process of learning the identity of these killers and the reason behind their attack, Captain Action teams with a beautiful female Russian agent and their quest leads them to a hidden civilization under the frozen wasteland of Siberia. “Jim Beard has written a terrific, authentic Captain Action adventure,” applauds Airship 27 Productions Managing Editor Ron Fortier. “It perfectly captures the break-neck speed and thrills of the early pulps only with today’s modern sensibilities. This book is sure to appeal to both Captain Action fans and new pulp enthusiasts alike.” 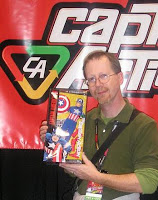 Author Jim Beard will be signing copies at Pulp Fest, in Columbus, Ohio, at the Airship 27 table on Sat. 11th Aug.  He will also be signing at Captain Action’s New York Comic Con booth in October.

Available Now at Amazon (https://www.createspace.com/3938619)
& soon from (www.IndyPlanet.com) & (airship27hangar.com)
Captain Action Enterprises, LLC.
As Retropreneurs, Captain Action Enterprises, LLC specializes in rejuvenating old properties for a new generation. Captain Action toys and collectibles are available nationally. The Original Super Hero Action Figure will soon return to comics in an on-going comic book series.  Additional properties include Lady Action, the Zeroids and Savage Beauty. For more information, contact ed.catto@bonfireagency.com.
Airship 27 Productions
Begun in 2004 to produce new novels and anthologies featuring classic, public domain pulp heroes of the 30s and 40s, Airship 27 Productions was one of the major factors behind the pulp renaissance which evolved into the New Pulp Movement.  Today they have over fifty titles in their ever expanding catalog, sell both hard copy and digital versions of their books and will soon be launching audio books of their titles. They can be found at airship27hangar.com
Share