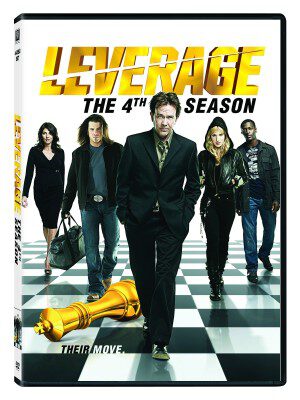 Most television series hit the fourth season mark with the characters firmly established allowing the creators and performers a chance to stretch a bit, certain they won’t lose their audience. The better shows know just how far to stretch, how far to push the formula, and when to pull back. Thankfully, TNT’s Leverage toed the line carefully by varying the stories told in the two half season comprising the 15 episode fourth season. The series has never been anything less than a delight as the con men turned good guys find corruption everywhere they turn and can’t help themselves, coming to the rescue.

The series features a strong, tight ensemble that is allowed to grow and develop, making us love the characters just a little bit more. The fourth season came out on a four disc set last week, just in time for the fifth season’s debut. One of the performers, Christian Kane, tweeted this was a vital season debut and wanted as many to tune in as possible. The reason rests on the ratings which, despite a solid creative run, saw the total viewers drop a dangerous 13% from the previous season. Another drop like that and the fifth may be the end.

But for now, we can revisit the highlights of what made the fourth season so much fun. It starts with the ever-changing locales for stories, starting with the season opener set on a hazardous mountain climb. Set just weeks after the end of the previous season, Nate (Timothy Hutton) and Sophie (Gina Bellman) have to explore what it means to them and the team now that they’ve (finally) slept together. The other romantic entanglement, Parker (Beth Riesgraf) and Hardison (Aldis Hodge), finally started to move after dancing around the matter the previous season. 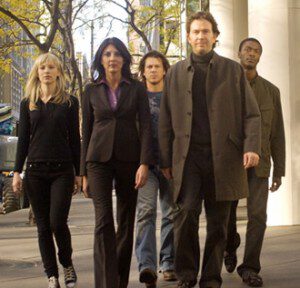 The meta story reveals that Jack Latimer (Leon Rippy) has been bugging their HQ and profiting from their exploits by investing against the marks. When he comes clean and asks for their help, Nate has to find a way out, setting up a finale that resolves many issues haunting the character from the first season. Along the way, though, there’s plenty of fun.

The story with the biggest wink to the fans is “The Ten Li’l Grifters Job” where Hutton got to dress as his father’s version of Ellery queen and the costume mystery is filled with literary and television detectives. One of the most interesting bits of storytelling can be found in the parallel stories in “The Girls’ Night Out Job” and “The Boys’ Night Out Job”. Old friends and foes surface, especially the fun return of Sterling (Mark Sheppard) in “The Queen’s Gambit Job” that adds to his character.

But it becomes clear towards the end that someone knows the quintet too well. Events lead to the death of Nate’s father, Jimmy (Tom Skerritt) with the architect of the murder revealed to be Victor Dubenich (Saul Rubenik), the first man taken down by the team in the pilot.  Nate is forced to find a way of changing the odds. He does so by having the team recruit strongman Quinn (Clayne Crawford), Parker’s mentor Archie Leech (Richard Chamberlain), hacker Colin (Chaos) Mason (Wil Wheaton), and Nate’s ex-wife Maggie Collins (Kari Matchett). The final two episodes of the season tie things up from the past as the team looks towards the future. It’s dramatic and fun and extremely satisfying. 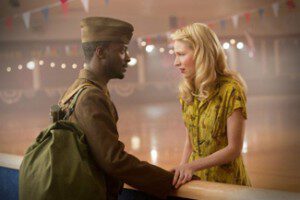 The show never lets it take itself too seriously and just when you think it’ll get maudlin, something quirky happens. The formula and cast is elastic enough to allow a wide variety of stories from the typical “The Boiler Room Job” to the somewhat strained “The Cross my Heart Job”, set in an airport. Creatively, the most interesting episode may have been “The Van Gogh Job” with the cast filling roles in a flashback story set during World War II.

There is a smattering of extras spread across the four discs but all are on the short side. You get a featurette on the season opener along with some deleted scenes. There’s a six minute glimpse into the writers’ room, deleted scenes from four other episodes and finally the usual assortment of outtakes. Funnier may be the parody, “The Office Job” Every episode though, comes with commentary and if they are all as interesting as the few I sampled, their worth a listen.

I adore the series and find Parker one of the freshest characters on the air today. Revisiting these characters every summer and winter is a distinct delight so the new DVD set comes well recommended.