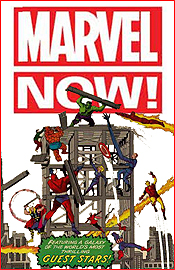 When I first heard that Marvel was launching a new title each week for five months, I thought “What do you mean five months? They’ve been doing that for years!”

My second thought was… “define new.”

As I’ve stated before, Marvel doesn’t reboot as much as it evolves: they’ll launch the 74th Captain Marvel while still using the first. Sure, they ignore stuff. Nothing wrong with that. It’s a lot easier than explaining why, in a logical continuity, Aunt May didn’t die long before most of the readers were born. So any comparisons between Marvel Now and DC’s New 52 are strained to say the least. Apples and oranges, as they say in the produce trade.

In looking over the lists of new Marvel Now launches, I see a bunch that seem interesting from a casting standpoint – both in terms of matching creative talent to characters and matching characters to teams. But Marvel’s been up to that for decades. What’s new about it now?

Marvel, and DC and everybody else, has been killing titles and relaunching them with new creative teams and big number ones on the cover ever since the direct sales racket started, so, again, what’s new about it now?

New costumes? This must be Wednesday! Spider-Man hasn’t had a new costume since every fourth page of any recent issue of The Avengers. The Red Skull is back? Damn! It is Wednesday! So, new? (That’s an awesome pun if you know Yiddish.)

No, really. I’m asking. What’s new about Marvel Now, now? What am I missing here? It’s just another huge marketing stunt, but – thankfully – one that doesn’t necessarily involve buying a million different tie-ins, crossovers and sidebar mini-series in order to get a complete road map. I’m sure Marvel’s likely to increase its sales lead over DC a bit. Big deal. Marvel is part of Disney, and increasing its lead over DC in the teensy tiny direct sales market wouldn’t provide sufficient motivation for Disney Chairman Bob Iger to lift his head out of his morning cereal bowl.

Look. I’m fine with all of this. It’s just nothing new. In fact, it’s a big part of why I’ve found the Marvel Universe fun ever since Fantastic Four #26.