Tom Baker To Don The Scarf Once More? 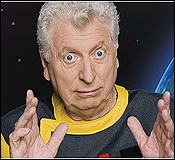 If this is true, the hearts of well over a million Doctor Who fans worldwide are about to beat just a little bit faster.

According to Slice of Scifi, Tom Baker will once again put on his mile-long multicolored scarf to reprise his role as the fourth Doctor in a 50th anniversary episode of the show, teaming up with eleventh Doctor Matt Smith. This is according to “a source close to the show.” Hmmm…

When Baker left the show back in 1981 as the series’ longest-running lead (a record held to this day), he said he wanted to put the part behind him. He was the only living Doctor who didn’t return for the 20th anniversary story, The Five Doctors. However, recently Baker came back to the role in a number of original full-cast audio adventures produced both by the BBC and by Big Finish Audio. The BBC episodes were set in contemporary time, and all co-starred other Doctor Who actors who had worked with Baker.

Is this the truth or is some well-placed hoser just jerking us around? Personally, I wouldn’t put the latter past show runner Steven Moffat – that seems to fit his whimsical public personna. But doing so would pretty much ruin the chances of Baker’s return to celebrate the 50th anniversary, and the BBC has confirmed they, and Steven, have “big plans.”

I hate to say it, but… only time will tell.