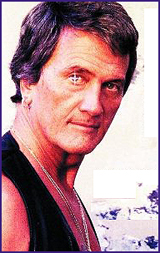 My thanks to Martha Thomases for her column this week. In it she confessed to having a fondness for the 1980 Flash Gordon film that started the immortal Sam Jones and Max Van Sydow. It’s bad film and she knows it but she has legit reasons for her fondness of it. Martha, just so you know, the 2007 SyFy TV series is much worse, not even having space ships, for crying out loud! Flash Gordon without space ships?! Talk about not getting the concept!

I say thank you because I had no idea what I was going to do for my column this week and now I do. There are bad films and one CD that I know are horrible but I felt a compulsion to go out and buy a copy of them. This isn’t the same as the weird films of which I own a copy and that I like – things such as Incident At Loch Ness, Get Crazy and, soon, Troll Hunter. These are all justifiable. Not the ones I’m about to talk about; uh-uh, these are plain bad and they are not recommended for viewing. Just to be clear about that.

First up – Barb Wire starring Pamela Lee Anderson. I may have talked about this one before but I stumbled on it one late night on TV while scanning the cable for something to occupy my sleepless mind.

The movie is based on a comic put out by Dark Horse at one point, part of their Heroes Greatest World series of superheroes. I wrote one of those comics for a while and I knew all the other titles. As I said, Pamela Lee Anderson starred in the movie and I lingered, waiting to see if she would take off her clothes, which is the main reason for any guy to watch a Pamela Lee Anderson movie.

I came in after the film started and then watched in horror as I became aware that the movie was an update of Casablanca into a future setting and featuring Pammie in the Humphrey Bogart part. ‘Nuff said? Nuff said.

And then there’s The Return Of Captain Invincible from 1983, a superhero spoof from Australia starring Adam Arkin in tights as the titular hero and Christopher Lee as his archenemy, Mister Midnight. Lee sings in this, by the way. Did I mention there are some songs sprinkled throughout? Not enough to make it a musical, just enough to not make sense – which fits right in with the rest of the movie. The lyrics to some of them were done by Richard O’Brien who wrote the original musical play of Rocky Horror Show and as an actor he was also in, among other things, Martha’s guilty pleasure, Flash Gordon.

I could run through the plot of Captain Invincible but – why?

Next on my list of very dubious pleasures – Jesus Christ, Vampire Hunter. Yes, you read that right. It’s a kung fu movie that has Jesus returning to Earth and winding up fighting as a king fu warrior against hordes of vampires, including lesbian ones, with the aide of a masked Mexican wrestler, Santo Enmascardo de Plata. Hmm. I may need to re-write that sentence; it makes the film sound too interesting.

Oh, and it also has a song in it. One. Right in the middle of the film. Why? Who knows.

Finally, there’s a CD – Pat Boone’s In A Metal Mood: No More Mr. Nice Guy from 1997 in which Pat covers heavy metal and hard rock songs with big band arrangements. Oh, and on the cover he wears black leather pants and matching vest – no shirt. Get that picture out of your mind if you can.

I don’t know if I’ve ever listened to the whole thing.

My friend, Bill Nutt, used to have a weekly radio show and, on occasion, I would be invited in as a guest and allowed to select some of the music. I told My Mary one such time to listen in because I would be dedicating a song to her.

That week I also played one of the cuts from In A Metal Mood and it played before Mary’s song came on. When I got back home, Mary demanded why I made her listen to the Pat Boone cut. In an unwise moment, I admitted neither Bill nor I had actually listened to it; we turned down the studio monitor once it came on.

That did not go down well. She has since forgiven me but I doubt she will ever forget my doing that to her.

What unites all these choices is the fact that I own a copy of each and every one of them. I can’t explain to you why these and not the other very bad CDs and DVDs that are out there. The selection probably says something about me and its probably not good.

And, Martha? Flash Gordon is superior to any of them.