Martha Thomases and Seth and Ted and Flash 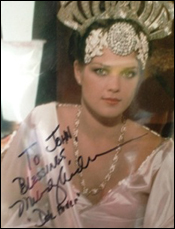 Pop culture can be a funny thing. I don’t mean “Ha ha” funny, although that is also sometimes true. I mean funny as in a head-shaking “Ain’t that a bitch,” kind of way.

For example, yesterday I went to see Ted. I didn’t want to, but it was the Number One box office hit this weekend and my son, the genius, is doing a blog on the subject, and he was in town for the Del Close Marathon. It’s not a very good movie, in my opinion, but I’m not a huge fan of Seth McFarlane. He’s okay, and I will always support him because his work points out the blistering hypocrisy of our shared alma mater . And I like fart jokes more than the average little old Jewish lady.

Still, I found myself tearing up. Did the film have unexpected emotional depth? No. What it had was a million references to Flash Gordon. Flash Gordon is a terrible movie I saw in 1980 when it was released, with co-columnist Denny O’Neil. It was so deliberately and hilariously bad that I dragged my husband to see it immediately. We own it in at least two different formats. I got him a signed photo of Melody Anderson for an anniversary present. Over the years, we found more opportunities to exclaim “Not the bore worms!” than you would think could credibly arise.

We find each other through shared interests. I met my husband because we both admired Paul Krassner. We laughed at a lot of the same things. He wasn’t into comics, but we found common ground in our appreciation of R. Crumb and Gilbert Shelton’s Fabulous Furry Freak Brothers. Our tastes weren’t the same, but I was not surprised when he liked Scott McCloud’s Zot! at least as much as I did.

What really bonded us, however, was seeing Pinocchio together at the Annecy Animation Festival. It was 1979, our first trip to Europe together. Annecy is a lovely little town in the French Alps. We were staying in a room in a charming small hotel that, when we went to take a nap with the window open, filled with cats.

Frank Thomas and Ollie Johnson were guests of the festival, and we got to hang out with them. I hadn’t seen Pinocchio since I was a child, and couldn’t remember the way it ended at all (too frightening). Watching it with John, seeing what a perfect film it was, made me love him even more.

Love is about a lot of things, but if you can’t share pleasure, there’s not much point to it.

Thank you, Seth McFarlane, for reminding me of those fun times. And also, the Ryan Reynolds cameo. That was great.