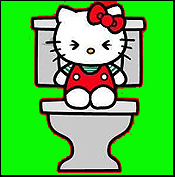 With apologies to my friend Martha (and more on this anon)…

Now where were we? Oh, yes. We were discussing naughty words. Last week, I mentioned that every civilization seems to have had them, though their content changed from culture to culture and even from time to time within the same culture. And the kinds of things they referred to – and still refer to – wasn’t consistent either. At one end, and forgive the pun if you dare, they refer to the stinky stuff that comes out of your alimentary canal, what television’s Dr. Oz refers to as “poop,” and at the other end, well…God or god, depending on whether we’re talking about my religion or yours. They have uses. The aforementioned Dr. Oz, on his TV show, actually recommended that they way to unwind is to shout s#%t! (I may have the gralix wrong – and note that the suitly fellows at Fox Broadcasting seem to feel that “poop” is acceptable, but “shit” would corrode the souls of the innocent.)

To a writer, they can be useful, these verbal no-nos, regardless of exactly what they are, because they’re rare. Save them for the big moments and then, when you drop the bomb, you get your audience’s attention and they indicate that whichever character uttered them is seriously disgruntled.

There’s an analogy to violence here. Once, in what we might (smirkingly?) call “classic dramaturgy,” violence was used to relieve tension or, again, to indicate that a character’s more than just upset. Now – it’s often just screen clutter. We’ve all seen what I think of as video game movies, in which the good guy slaughters evildoers in wholesale lots, faceless cannon fodder who exist solely to be slaughtered and demonstrate the hero’s aptitude for mayhem. Exciting as watching a faucet drip? Well, no. The stuff involves movement and noise, both of which we’re wired to respond to, but the prevalence of these scenes deprives writers of the earlier uses of extreme action.

Same with the words. If “fucking” is the all-purpose modifier, it loses its capacity to signify emotion extremity.

It was once used to indicate that the speaker was either a thug or a tough guy or at least someone of low estate. But, hey, if altar boys use the word…

A screenwriter of my acquaintance observes that this is how modern people talk and if your story is to be realistic, your characters can’t sound like refugees from a Jane Austen novel. No argument. I’m just reporting, not pushing an agenda.

And what might happen if, from overuse, naughty words vanish from our vocabulary? Anyone else find that an interesting question?

Two last items: “Gralix” is what cartoonist Mort Walker, of “Beatle Bailey” fame, calls the miscellaneous symbols that stand in for ^&##$%* words he isn’t allowed to use in family newspapers.

And finally… Martha, I’m sorry I poached your turf. I wrote last week’s column before reading the very similar one you wrote recently, and first. Mea culpa...