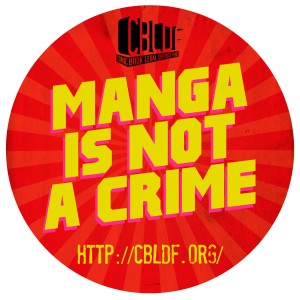 The Comic Book Legal Defense Fund is pleased to announce that thanks to the support of its contributors, the organization has disbursed an additional $10,000 to Ryan Matheson to help pay off the $75,000 legal defense costs that he incurred defending himself against false charges brought by Canada Customs in a case involving manga comics on his laptop computer.

Earlier this year, charges against Matheson were dropped in a case where Canada Customs illegally detained and wrongly charged the American with importation of child pornography for humor and fantasy manga on his laptop. The CBLDF came to Ryan’s aid in 2011, providing substantive and financial support for his case, including arranging expert testimony that contributed to the charges being dropped. With this most recent disbursal, the CBLDF has provided $30,000 to Ryan’s $75,000 legal defense costs. Last year, Canada’s Comic Legends Legal Defense Fund contributed $11,000 towards Ryan’s defense. CBLDF seeks contributions to help pay off Ryan’s remaining $34,000 in legal expenses.

In a message to CBLDF supporters, Matheson says, “Thank you so much to everyone who contributed to the CBLDF! The donations raised so far have given me enough financial stability to finally get back on my feet and live my life normally instead of worrying about money so much. It’s really encouraging to know that there are so many people out there that want to help stand up for comics and manga. I used to feel so isolated and alone but now I’ve realized that the comics and manga community is definitely one that cares about the things we love and is willing to stand up for our rights. Your donations really do help a lot and I am so grateful for all the support I’ve received so far. Thank you!”

After a search of his laptop in 2010, Canada Customs wrongfully accused Ryan of possessing and importing child pornography because of constitutionally protected comic book images on that device. This case represented a severe disruption in his life, including a two-year period during which he was unable to use computers or the internet outside of his job, severely limiting opportunities to advance his employment and education. Ryan suffered extreme mistreatment at the hands of Canadian authorities, and was subjected to abusive treatment by police. Matheson’s cruel and unusual punishment included being denied food and blankets, and not being allowed to contact the American Embassy. Matheson was even told by police transporting him to prison that “if you get raped in here, it doesn’t count!” The defense detailed these and other abuses and outlined that the comics at issue are constitutionally protected in the United States, the client’s home country, contributing to the charges being dropped earlier this year.

This summer, Matheson will be appearing on panels at San Diego Comic-Con and Otakon to discuss his case, where CBLDF will also be distributing literature advising convention goers of their rights.

CBLDF Executive Director Charles Brownstein says, “The CBLDF is elated that our efforts have made a difference in Ryan’s case, and we’re grateful that our supporters have generously contributed to our efforts to pay off expenses tied to his legal defense. We are moved by Ryan’s courage in speaking out on his case, and look forward to working with him this summer as we go on the road to help raise awareness of how comics and manga are still being targeted by the authorities. We’re glad that his case had a positive outcome, but comics are still vulnerable to attack. It is our hope that our efforts will help prevent others from suffering the same fate that befell Ryan and his family.”

Please make a donation to CBLDF to help the organization continue to pay off Matheson’s legal defense costs and to support their important work raising awareness of the rights facing comics and manga readers. To learn more about Ryan’s case, please visit the CBLDF Case File R. v. Matheson, which includes the original defense documents, and special advisories for travelers crossing borders with comics books.