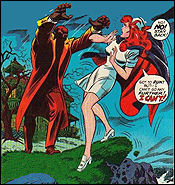 The Supreme Court finally ruled on the Affordable Care Act. Hallelujah!  They went my way!

Now I don’t have to worry about that chance the court might strike down the individual mandate, which would mean my premiums would have gone up – in New York, if one is self-employed, one pays gigantic premiums. My worrying didn’t make the difference, however, so let’s consider something really important.

Can super-heroes get health insurance?

Barry Allen was already working for the police department when the lightning bolt caused those chemicals to drench him and made him The Flash. Usually, public employees get good insurance. He should be okay. We can only hope that Tea Party pressure hasn’t weakened his union’s negotiating power and force public workers to take a worse policy.

Bruce Wayne not only has enough money to pay any medical bills he might have out-of-pocket, but he also has Alfred on staff, who, in addition to his butler skills, also seems to be something of a battlefield surgeon.

Reed Richards is a doctor. Presumably, he can take care of many of his colleagues. Those he can’t might be cared for by Dr. Strange, or Dr. Mid-Nite.

But what about the others?

Once you’re bitten by a radioactive spider as a teenager, you have a pre-existing condition. And, as a self-employed person in New York (at least when he started freelancing at the Daily Bugle), Peter Parker probably got a policy with a high deductible, if he got a policy at all. Here’s hoping that radiation didn’t cause cancer along with a spider sense.

Can test pilots get insurance at all? Even if he wasn’t a Green Lantern, is Hal Jordan the kind of guy who could get a policy?

Among those without powers, masks or capes, there might be circumstances that make it difficult to get a coverage. It seems that just living in certain areas invites life-threatening accidents. I know that living in the New York area means I pay higher rates, so I guess most of the Marvel Universe does as well. Metropolis, Gotham, Coast City et al. are probably no bargain either.

Who pays for those over-worked emergency rooms, especially after an alien attack?

If ever there were places that could use single-payer health insurance, it’s the DC and Marvel Universes.