Michael Davis: Spider-Man, Spider-Man does whatever and who cares… 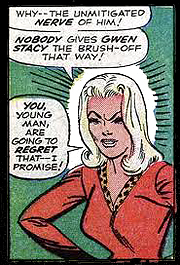 Am I the only one that could give a flying fish about the new Spider-Man movie?

I have no desire to see that film. You would think that a Spider-Man junkie like myself would be counting the days until it opened.

Nope. It could have opened already and it would still not be a blip on my must see radar. It would be great if the reason I have no yearning to see this film is because The Avengers was so good it made waiting to see any other superhero film unattractive.

Nope. I still can’t wait to see the next Dark Knight movie.

I simply have no desire whatsoever to see the new Spider-Man film. Is it the new actor that turns me off? Maybe, in the clips I’ve seen I have none and by none I mean no emotional attachment to him. Granted, I only get to see snippets of him in coming attractions but in those snippets I can garner no interest in this guy.

Perhaps I’ve gone extreme fanboy and by extreme fanboy I mean, perhaps Marvel Studios has done something that just does not sit right with me so I must go to a dark fan place.

I’ll admit to being a fanboy and I’m mighty proud of that distinction, but being an extreme fanboy is something I’d never thought I’d succumb to. The difference between fanboy and one who is of the extreme kind is this; an extreme fan boy will spend endless hours, debating, blogging and otherwise conversing about whatever is bugging he or she. A regular old fan boy will just enjoy the ride and revel in all that is his or hers pop culture drug of choice.

That is the essence of the true extreme fanboy; talking passionate shit about something most of the world could give a fish about!

So, what has gotten me to extreme fan boy status over the Spider-Man movie? What has sent me from can’t wait to I could give a shit?

Gwen Stacy is in this retelling of the new Spider-Man movie.

Why? Oh why is that?

There were plenty of places to take Peter Parker after the third movie but someone had the bright idea to dig up Gwen Stacy. My beloved Gwen Stacy.

Why? Just so I can watch her die again? Everyone knows that Capt. Stacy, Gwen’s police chief dad and Gwen bite the damn dust. Well every real fan of Spider-Man knows that. I guess killing Gwen all over again for the delight of the millions who don’t know is O.K.

It’s O.K. to kill the first non-real woman I ever loved?

I can’t think of any reason except Sony and Marvel studios desire to reinvent Spider-Man and bring in some Twilight or some other pussy franchise’s fan base. What better way then getting you to take your girlfriend to a superhero movie and get you to cry like a little bitch when Gwen dies?

That, my friend, is just cold blooded. Or, to put it another way, that’s Hollywood.

So, no I won’t be seeing this Spider-Man. If I’m wrong and Gwen survives I still won’t see it. If she survives this film you can be damn sure she will be toast in the next one.

I’m not going out like that-seeing her neck broke when I was a little kid was enough for me.