Jen Krueger: Breaking Down the Breakdown 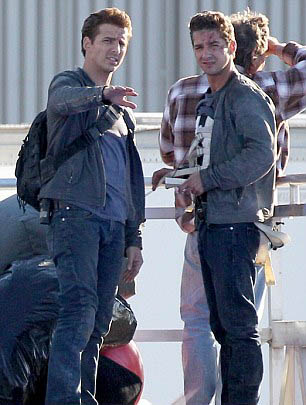 Shia LaBeouf claims that the other guy is a stunt double and that he’s the one being copied here. We don’t believe it either.

By spending six days last week wearing a paper bag emblazoned “I am not famous anymore” on his head as part of an art installation entitled #IAMSORRY, Shia LaBeouf became the latest celebrity to very publicly seem to have…let’s see, how do I put this gently…”lost it.” The installation itself is the culmination of nearly two months of behavior questionable enough to make people wonder if the actor is in the midst of a mental breakdown, yet it conveniently also began not long after LaBeouf came under fire for plagiarizing a graphic novel by Daniel Clowes, and is apparently only ramping up as the release of LaBeouf’s latest (and most controversial to date) movie draws nearer. It’s this timing that makes me think every bit of the bizarre behavior is entirely calculated for publicity purposes, which happens to be my default reaction nowadays whenever I hear about any celebrity acting remarkably strange.

Maybe I should blame my skepticism on Joaquin Phoenix. When he declared he was retiring from acting in 2009, grew a huge beard, and started performing as a rapper, it seemed plausible to me that a person with a famous tragedy in their past and many years of the rigors of their own fame bearing down on them could reach a point where they dissociate from reality to a certain extent. The weird behavior over the many months that followed oxymoronically rang true due to the consistency of the weirdness (Phoenix’s story never changed in interviews and his demeanor remained the same even when captured by paparazzi in the midst of doing everyday things). Casey Affleck following his buddy around with a documentary crew lent even more credence to Phoenix’s claims of leaving acting, since an Oscar winner retiring from his craft at such a relatively young age seemed a natural subject to pique the interest of a filmmaker with some notable acting experience of his own. Of course, eventually Phoenix and Affleck revealed the whole thing could be chalked up to a work of fiction Affleck was filming, I’m Still Here. The duo explained the film was meant to explore the nature of celebrity, as well as the relationship between the famous and media consumers. Regardless of Affleck’s and Phoenix’s intentions, most headlines about the movie and Phoenix’s immersion in the character while filming it had one word in common: hoax.

Since then, it takes a lot to make me buy into any so-called celebrity breakdowns. A certain level of savviness in public image is required in order to get and maintain fame in the first place, and whether a celebrity seems to have that savviness themselves or a publicist paid to have it for them, I tend to assume the famous at the very least can’t help but be aware they’re under a microscope. That being said, drastic changes in behavior occurring in the public eye are suspect for the sheer fact that they’re public. Whether the change in question is a sudden shift from Disney star to bad girl with a partially shaved head, or from sitcom star to grown man claiming he’s impervious to addiction because of “tiger blood,” a celebrity allowing such a change to happen in front of a camera is akin to admitting there’s a book or TV deal on the table, or albums or movie tickets for sale soon. And since the general public is now by and large media savvy enough themselves to recognize these kinds of publicity ploys for what they are, the amount of coverage LaBeouf’s obvious press pandering has gotten left me asking myself something:

If we recognize these “breakdowns” as publicity stunts, why do we continue to give them our attention?

Personally, I find the nature of what the famous do with their fame fascinating. The way some actors shun revealing any personal information at all, the way people on multi-season reality shows begin to morph into caricatures of themselves, and even the way some wildly famous people manage to maintain home lives that seem so normal they’d strike some as boring are all things about which I could happily read in depth psychological or sociological theorizing. On a much shallower level, I also find looking at the lives of celebrities good for a little vicarious fun. No matter how you slice it, fame is such a rare commodity that most people will never experience it, or an in-depth understanding of it.

But celebrity breakdowns offer a unique peek behind the curtain. If they seem real, they give us a glimpse at a dark side that accompanies the perks of fame, which makes the prospect of being famous less appealing while also making the celebrity seem a bit realer through the exposure of a part of themselves not metaphorically buffed nice and shiny for the camera. If a celebrity breakdown seems engineered for publicity, it speaks to the subject’s feelings about their own fame and its utility, something that’s rarely discussed in a candid manner because it would be difficult for a famous person to do so without sounding uncouth.

I’ve read about, seen pictures of, and watched video from LaBeouf’s art installation, but even though it was within walking distance of where I live and I’m curious about how he would’ve reacted if the boundaries of the installation were truly pushed, I didn’t go see it. Because I don’t believe the professed repentant attitude that’s supposedly spurring the exhibit, I find I can’t take it seriously. It seems to me if LaBeouf truly was sorry, he’d simply step out of the limelight altogether.