Marc Alan Fishman: Exclusivity Is For the Devils 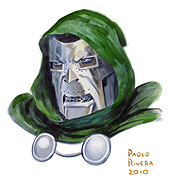 For those not paying attention, this week Paolo Rivera broke the shackles that bound him to the House of Mouse. That’s right, after a 10+ year career at Marvel, he ended his exclusive contract. Presently, you might know him from his absolutely stunning work on Daredevil. And if you’re not familiar? Go down to your local comic emporium, and partake in a few books bearing his name. You won’t be disappointed.

So why the departure, here in what most critics would dub his “ascension to the A-List?” Ownership. Rights. Long-term gains. As he makes it clear in his blog detailing his decision, it comes down to surveying his body of work and seeing no island on the horizon. Let’s be clear, he’s not mad. Or sad. In fact, he’s very grateful for the decade of work he’s been thrown since the dawn of his career. At the end of the day though, he puts it best:

“…the sum total of that work is not enough to support me in the distant future. My page rate is essentially the same as when I started at 21, so I’ve decided to invest in myself.”

Now, this brings up a debate I know we’ve all had here on ComicMix in the past – that of creators’ rights, and compensation. It seems we as an industry can’t last more than a few months before yet-another-creator is irate over the profits gained on their blood, sweat, and arthritic hands, that never see their own pocketbook. On the business side of things, we know the rub already. To work as an artist or writer in comic books for “the Big Two,” the work you do is theirs. They pay you a fee (and a small percentage of royalties of the sales of the book) for your creativity. Now, when you have a mortgage, insurance, and a rumble in your tummy… do you try to negotiate for the best deal, or do you sign your life away to stay alive? Of course no one is in such dire straights these days, but Marvel and DC certainly have more lawyers and iron-clad contracts than Stan Lee has catchphrases. As Paolo makes clear, he’s done with that side of the business. It’s time to invest in himself.

Certainly there are creators out there who are kicking ass and taking names doing their own creator-owned books. Mike Mignola, Eric Powel, Robert Kirkman, Warren Ellis… All great men who once (and on occasion still do) made a living working for “the man.” But each of those men now can rest on their laurels that their main source of funds comes directly from material they created, they own, and they see to market. Certainly when Hellboy made a second profitable movie, many an indie-creator must have taken note. Yes, Dark Horse had a lot to do with the success of the property on the business end, but Mignola is the crown prince of Anung Un Rama. Without his blessing, nary a product makes its way past a marketing meeting.

The same doesn’t hold true for Mr. Rivera. Should Marvel decide to make a tee-shirt with some of his art? He may see some royalties back from the sale – but he’d get laughed out of the office if he opposed them selling merchandise with his work on it. And when they reboot the movie franchise… he’ll see a blind eye if they use any of his striking work as reference or source material. Blind eye. Heh.

Ultimately, Rivera’s made a move that I hope works out for him. Admittedly I’ve come to the Daredevil party a bit too late, but I plan on picking up the issues as they are collected. Wherever Paolo roams from here on out, may his legion of fans follow. According to his musings, he’s kicking around an idea for an “original story, sci-fi in nature, with primal themes and a compact cast of characters.” He’s also looking into “experiments in both distribution and funding” a la Kickstarter. Thanks largely in-part to the interwebs, this very idea even exists. The last time artists with this much clout left Marvel, they made Image Comics. Certainly that won’t happen ever again, but in its place is something far more rewarding. Not necessarily in up-front hype and profits mind you, but rewarding none-the-less.

With Paolo Rivera setting his sites on the creator-owned market, I see the opportunity for a more level playing field. When the artists and writers have both a creative and monetary investment in a project, there is a passion that simply doesn’t exist on the other side of the aisle. As an Unshaven Comic, I care far more about The Samurnauts than I ever will about Kyle Rayner or GrimJack, even if I’m ever allowed to write or draw either of them. When I put my head to pillow, I know that my creations (made in part with two brilliant co-creators) are my own. And should the day ever come that our creation becomes “something,” it’s only fair that I (we) see the complete fruit of those labors.

Good on you, Paolo. May others follow suit as well.