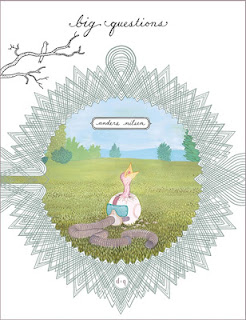 If you’re plugged into the comics field at all, you’ve probably already heard of this: it’s the gigantic out-of-left-field book that all of the cool kids have been talking about for the last six months (call it 2011’s Bottomless Belly Button

). Of course, the really cool kids have known about it for a while: Nilsen has been serializing Big Questions

as a series of smaller comics for close to a decade now.

In a wide, open landscape — there’s a stand of trees by a river, and a single farmhouse, and even some caves underground, but what we see most of all is widely scattered single trees — live a flock of small birds, who are collectively our main characters. They’re fascinated by “the giant,” which they think is a massive metal bird, by the metal egg that it drops one day, and, later, after that egg is no more, by the grounded giant itself, and the man that comes out of it. That single farmhouse is also the home of an old woman and the idiot grandson she takes care of, but the humans in Big Questions are all seen from outside, like the other non-bird dangers, like the Owl and the Snake.

The birds question their lives, their cosmology, the purpose and ends of the world around them — these are the questions of the title. And they, despite their best attempts, don’t really understand what’s going on with the giant, the egg and the pilot, or with the grandmother and the idiot. Nilsen tells his story from the point of view of a dozen unreliable narrators, but has the clarity and precision of his drawings to show us both what’s really there and what the birds think is there.

Big Questions is a magnificent achievement: sweeping, even epic in its scope, with a heartbreaking sense of mortality and loss while maintaining a sense of mystery and spookiness. But it all begins with a few birds — drawn more simply than the style Nilsen developed later in this story — wondering about the purpose of their lives. It might not answer those big questions, since no book could, but it asks them well, and thinks about them deeply, and tells a worthy story around them.