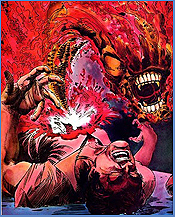 In a seasonal confluence, the movie Prometheus opens today, just as Book Expo America (BEA) ends. In 1979, I saw the first Alien at a screening in Los Angeles at the American Booksellers Association convention, the precursor to BEA.

ABA (as it was known) is the professional convention for the publishing industry. Publishers have booths with which to show their upcoming titles, and booksellers from all over the country come to see what will fill their shelves. It’s a grand event where books are glamorous, authors are rock stars, and librarians are courted. It’s changed over the years – they are even experimenting with letting consumers in this year – but it remains a celebration of ideas and literacy.

It was my first time at ABA, but the man who would be my husband was an old hand. He’d been going since 1963, when he was 12 years old. His father had taken a job with a small bookstore in Minneapolis, which had ambitions to grow and become a national chain. That bookstore was B. Dalton. As a result, my husband was used to attending, and accustomed to being fussed over by publishing houses that wanted to make a good impression on his dad.

By 1979, his dad had long since left B. Dalton, Minneapolis, the United States and the Northern Hemisphere, but John still knew his way around the convention floor. He showed me how to get free books, catalogs, and all sorts of other cool stuff.

One of the cool things we got was a pair of tickets to a movie screening. Alien. The same booth had a graphic novel adaptation by our pals Archie Goodwin and Walter Simonson (which seems to be on the fall list this year as well). I had never been to a movie screening before. I was really excited.

That night, I read the book. It scared me so much that I was unable to sleep. We were staying with my cousin in a tiny little cottage in Laurel Canyon, and every noise from outside sounded like a landing spaceship to me, not a coyote.

We left the convention with plenty of time to get to the theater for the movie. I had very particular ideas about the best place to sit (near the front, in the center of the row). I had to get there early enough so that I would have my choice of seats. I’m still like that. If you’re going to go to the movies with me, you had better be prepared to be at the theater half an hour before showtime.

Once the movie started, for the first 45 minutes or so, I was in heaven. I loved the way the future looked in the film. It was the first time I’d seen a spaceship that looked like people lived in it. There was dirt and grime. People put up New Yorker cartoons. The cast was great, and I especially loved John Hurt, whom I had only previously seen as Caligula in I, Claudius.

Boy, was I upset when his character was killed off.

You have to understand. I had read the book the night before. I knew what was going to happen. I knew the good guys were going to win at the end. And yet, I was still terrified. I was sitting in my seat, peaking through my fingers, knowing that I had about an hour left to sit in the theater and wait for the monster to jump out of dark places. Finally, I decided to go. I stepped over the many people sitting in my row (since I had to sit in the middle).

My husband had too much self-respect to leave. He later told me he did his best to hide under his seat.

And now, Prometheus is supposed to explain the story of what happened before Alien. It’s directed by Ridley Scott, whose eye for detail makes his films always worth watching. It was the film my husband was most looking forward to seeing this summer.

The trailers scare me.

I like to think of myself as a good feminist. I don’t need a man to give my life meaning, to pay my rent or open my pickle jars. And I don’t expect a man to protect me from movie monsters.

But I’m afraid to go to this movie by myself. Either I’ll find the courage, or take the cat.