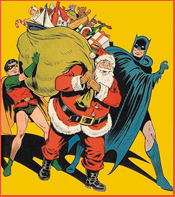 The good news is, the Christmas gift list is shorter this year.

The bad news is, the Christmas gift list is shorter this year.

But enough gloom, for ‘tis the season to be jolly, ‘tis it not?

And judging from the number of cars in the mall parking lot, the season ‘tis jollier’n hell. Don’t these shoppers know about the mess the economy’s in?

And now a quick trip into the Chamber of Curmudgeons, significantly emptier since Andy Rooney’s gone. But (entering the chamber) I am the guy who once commissioned a magazine cover depicting a skeleton in Santa Claus garb holding an empty sack, so my curmudgeon cred is intact. And I proclaim:

It used to be so much easier, dang it!

Buying gifts for comics geeks, that is. Because there really wasn’t much choice. Back in the Pleistocene, when I was reading my first comics, Batman or a Superman might serve as an also-gift, what’s called a stocking stuffer, but even a not-too-bright gradeschooler knew that a comic cost only a dime and there had to be something else under the tree.

Later, much later, after the first Batman hardcover graphic novels turned out to be good sellers – best sellers in the limited world of comics – an editor or two was yearly tasked with producing a hardcover for the holiday trade. It was sometimes difficult for the editors, but a good deal for people seeking a present for that snotty nephew who always had his head in them funny books. A couple of sawbucks and – problem solved.

Now… big changes. As a stereotype, that kid with the buried head no longer exists. Comics have attained full parity with other forms of story delivery. You’re not expected to be dumb if you read the stuff. You can, with good conscience, buy a graphic novel for almost anyone you know who likes to read. Or use something comicy to introduce a reader to something he/she hasn’t yet discovered, and might enjoy. You doubt? Hey, Maus won a Pulitzer.

But your choices aren’t limited to Art Spiegelman’s masterpiece. Lordy, no. The monster book mart in the aforementioned mall has a wall full of comics stuff: manga, hardcovers, paperbacks, reprints, originals…that’s not counting the novelizations of movies over in the science fiction section and…that’s not counting the growing list of books about comics.

Cost? All the way from four-five bucks to – brace yourself – four hundred American dollars for the deluxe edition of Star Wars comics published by Abrams and also available in a more modest edition. (Okay, I wrote the introduction. But I don’t get royalties. We’re honest curmudgeons here in the Chamber.)

My recommendation? How about, all of the above? Or: if you’re a book person, you probably like to browse. So browse, on online or off. If you’re likely to be the gift recipient, drop hints. You know how to do that. You’re smart. You’re a comic book reader.