Pauley Parrette: from NCIS to the Daily Planet 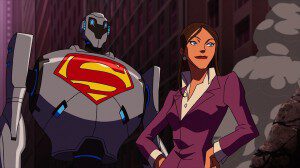 Actually, both – which made the NCIS star the perfect match as the voice of the resourceful reporter for Superman vs. the Elite, the latest DC Comics Premiere Movie coming June 12 courtesy of Warner Home Video.

Over nine seasons and more than 200 episodes, Perrette has mesmerized audiences with her portrayal of Gothy forensic specialist Abby Sciuto on NCIS, regularly the top rated drama series on primetime television. The role has elevated Paulette’s popularity into are air – in August 2011, she registered the top Q-score in all of primetime television. Not only was she the only female to rank among the Top 10 TV actors, her score matched that of feature film luminaries like Tom Hanks.

In addition to NCIS, Perrette has appeared in feature films like The Ring and Almost Famous, and had recurring roles on The Drew Carey Show, Jesse, Dawson’s Creek, 24 and Murder One. For the 2009 indie short To Comfort You, Perrette earned the award for Best Female Performance at the Beverly Hills Film Festival in the Short Film Drama category.

And while Perrette doesn’t boast a large amount of experience in animation, this isn’t her first time in the Bruce Timm pool – having given voice to a police officer in an episode of Batman Beyond.

In Superman vs. the Elite, Superman’s effectiveness as a super hero comes into question when a new group of super powerful crusaders, known as “The Elite,” appear on the scene.  As super heroes, the Elite know no bounds, and are more than willing to kill, even on a massive scale, to stop villainy — putting them on a collision course with the ever-ethical and decidedly non-lethal Man of Steel.

The ever-gracious Perrette spent some time after her initial recording session to chat about her love of Superman and Abraham Lincoln, her hatred of bad guys, her own super heroic efforts on behalf of numerous human rights charities, and the benefits of a criminal science collegiate background in acting today. Please read on and, wherever available, watch the video clips of Ms. P’s interview.

QUESTION: Was there any special personal significance for you to act in a Superman movie?

PAULEY PERRETTE: When I was little, I think that I wanted Superman to be my boyfriend. So this is the next best thing. I get to pretend to be Superman’s girlfriend. Although the older I’ve become, I’ve sort of decided that I would rather be Superman myself. So I’m trying (she snickers).

But even my first memory of a super hero was of Superman, because I had a crush on him. Well, it was on Clark Kent, Superman and Christopher Reeve, all rolled into one.

QUESTION: Did you have any preconceived ideas of how you wanted to play Lois Lane?

PERRETTE: When you’re doing voice work, and I said it right when I came in the door, I said, ‘I’m very obedient, and I will take direction.” Because the people who have written this, and the ones who have been envisioning the animation in their head, they have such a specific concept on what they want, that it’s good for me to say, “Give it to me. Give me every piece of direction you want. I’ll do it 10 different ways. Whatever you want.” It’s their vision, and I want to achieve that. If I get an idea while I’m doing a voice, I will offer it … “Hey, can we try this?” But it’s still up to them.

QUESTION: Your emphasis in college was rooted in studying subjects like sociology, psychology and criminal science. How do you think that’s benefitted you as an actress and, in particular, has it lent new perspective on Lois Lane?

PERRETTE: I do think my background in sociology, psychology and criminal science has helped me as an actor because I spent years and a years and years studying human behavior as a science, and as an actor — in approaching a role like Lois Lane or any character – it’s always fascinating to me to try to figure them out psychologically and sociologically. In many ways, acting is really like a science to me to figure out the human behavior of any character that I’m playing.

QUESTION: Now we know how you come to understand your characters. Do you have any acting tricks to then convert that information into a portrayal?

PERRETTE: I always tell myself that when you’re playing a character, pretend like they’re on trial and you’re giving the best witness of their life. You really need to think about every element of the character and represent them properly, as if they were a real person. You want to give 100 percent of what they’re worth and what they deserve as people.

QUESTION: Do you see Lois Lane as an important role model for girls, and who inspired you as a kid?

PERRETTE: Lois Lane is an inspirational character because she’s a smart and powerful woman. Even when she’s with Superman, she has no problem putting him in his place, and giving her opinion. It’s quite an honor to give voice to Lois Lane and be part of that legacy. My personal inspirations were a lot of the smart women throughout history, like Marie Curie and Eleanor Roosevelt and Amelia Earhart. Those are the ones that really inspired me. And the love of my life, Abraham Lincoln.

QUESTION: It seems as though you spend almost as much time volunteering for charities as you do on set. With as much charity work as you do, aren’t you a bit of a super hero yourself?

PERRETTE: My life outside of work is pretty much about charities. I have a big passion about civil rights for everyone – whoever is being downtrodden at the moment, it doesn’t matter: racial discrimination or sexual orientation or gender. Whatever it is, I’m there. I think I was a born civil rights activist. I can’t stand the smashing of a community. It’s not fair and it’s not right. We’re supposed to be here for liberty and justice for all, right?

QUESTION: Is there a geek within Pauley Perrette?

PERRETTE: My geekiness is in science and math. So if I had an ultimate geek role to play, I’d be a super scientist who was also a crime fighter. But on NCIS, I’m actually playing a crime-fighting super scientist right now, so maybe all my geeky dreams have come true!