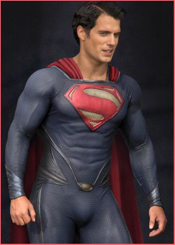 It was inevitable this week, now wasn’t it? All of us true-blue-comic-geeks are reveling in the acclaim and success The Avengers is enjoying. The critics generally liked it. Audiences are eating it up. Mark Ruffalo’s star is rising like Apple after the invention of the iPod. And comic book columnists are dancing in the aisles over it all. Michael Davis wrote a great piece on how the flick is a giant bitch smack to Bruce Wayne and his Brothers Warner masters.

Now I could suggest that, based solely on the sheer brilliance of Nolan’s Bat Films, our resident Master of the Universe (his phrase) isn’t exactly on the money… but why start a fire? Rather than blather for the sake of creating a phony flame war between the king of San Diego Con and this lowly Midwestern cracker, I’ll find my muse in Michael’s throwing of the gauntlet. It’s the idea we’re all thinking; DC could just copy Marvel’s blueprint and rake in the dough. But really, when we dissect that idea, this molehill quickly becomes a mountain. Where to begin? How about with the lynchpin – Superman.

Man Of Steel can set DC on the right path – or just nail the coffin closed. As many have seen with the various leaked set photos, and blurbs being dropped on the interwebs… the movie is assuredly in the vein of Nolan’s Dark Knight trilogy, where realism is king. The men with the checkbook want results this time. No doubt that influenced all those in on the production to match the tone and soul of Nolan’s films. And the skeptics all agree, the blue Boy Scout should be as gritty as soft-serve and real as well… Superman!

Paul Dini, fifteen plus years ago, got it right. Based solely on some production stills, Zack Snyder isn’t paying attention. Granted I like Snyder a lot, but his last few cinematic efforts (Sucker Punch and the Watchmen) didn’t exactly incite waves of acceptance from the geek nation. It leads me to state the obvious: There’s only so much angst the fan base is willing to accept for the prodigal son of comic books as a whole. Simply put, Superman without a smile is indeed no Superman at all.

Think back, just a week ago, when you were watching The Avengers. Think how many times you laughed out loud, smirked, or just geeked out over a simple fight. Now think of Green Lantern. The proto-franchise out just one summer ago showed just how wrong DC “got it” when it came to the bridge between the pulp and the picture on the big screen. The movie was over-produced, under-written, and a pitiful invitation to celebrate the greater DCU. Don’t believe me? If that movie had lived up to its potential, mark my words, there would be no “New 52.” When Marvel launched the Avengers initiative, they did so with Iron Man. And that movie, nose to tail, was as good as Batman Begins. Hold that up to the boy in the green jeans? Don’t even try.

If DC intends to make their way into the arena to match The Avengers with a multi-franchise comic book based pantheon, they must be mindful of more than just the broad strokes. The House of Mouse was smart enough to hire genuinely good directors and writers to helm their pieces. They chose strong stars. Most important, they spent time developing stories that kept in mind plot, pacing, and fun… more than toy tie-ins. In order to match, or dare I suggest, beat Marvel at their own game, Warner Bros. needs to do more than throw money at the problem. At their very core, they need to trust DC with their product and presentation. That means when the screener gets a bad reaction, you don’t just write a check to increase the CGI budget and hope special effects cover up the plot holes. It means not demanding you gank a style of a successful movie and apply it to a wholly different franchise in hopes of snagging an unsuspecting public.

In other words… do what Marvel did.

DC has truly globally recognized properties in Wonder Woman, Batman, and Superman. Second tier talent like Green Lantern and Flash have oodles of untapped potential. DC even boasts a far better villain list. The Chitauri were undeveloped screaming CGI props to be blown up. Darkseid’s parademons are too, but they serve a grander purpose. And Darkseid brings with him InterGang and a slew of lieutenants that add flavor to a generally one-note bowl of soup. The pieces are all on the table, it’s just a matter of taking the time to put them together instead of mashing and taping them. Here’s hoping DC takes the time to realize the potential they have – and make the choice not to squander it for a quick cash-grab.