Emily S. Whitten: Comics – We’re In This Together! 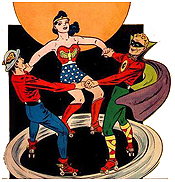 I’ve been writing for much of my life, whether for school and my career, for my blog and online columns, or creatively. In the creative vein, I’ve written short stories, and poetry, and silly humorous things, and am currently working on-and-off on two novels. But in none of those endeavors did, or do, I have a collaborator – a.k.a. a partner in crime! Writing is generally a lonely business. It can be a joyous experience; but even if you have an idea you know you want to express, it can also be a struggle to formulate it, get it down on paper or in a Word document, edit it, and then show it to another human being. That last bit can be especially hard. Even if you’ve been encouraged in your writing, it can be damned difficult to open yourself up for criticism about something so personal – a thing that’s come out of your head and your (mental) sweat and tears, and that you think you might just love, but fear others may scoff at.

For example: back in high school, I was a winner in a fairly competitive poetry contest for which the prize was $100 (yay!), a book of poetry, an invitation to read your poems at a local event for the judges, some poets, the other winners and their parents, and then an opportunity to read on stage at the Dodge Poetry Festival. I didn’t make the Dodge Poetry Festival, seeing as how I had to be in another state starting college the week before it occurred, but I did go to the local reading. I’m not generally a nervous public speaker when it comes to presentations or debates but on that day I was thoroughly dreading getting up and reading my own creations in front of everyone – and particularly the professional poets and other winners.

What made it worse, of course, was that with my “W” last name, I was one of the last to read. I sat there and listened as winner after winner read these deep, sorrowful poems about dying and winter and illness and frozen birds (really) and all of this very, very angsty stuff, and I started wondering if perhaps the judges had added my name to the winners’ list by accident. You see, the poem I’d chosen to read was sort of a happy thing, about nature and peace and contentment and family; and as I listened to all of this raw, dark emotion pouring out I thought, “You know, I don’t actually think I’m supposed to be here. Can I just go home now, please?” Even after being chosen as a winner, I was still afraid I didn’t really fit in there, and nobody who listened would think my little poem was any good, and I’d be left standing at the podium in embarrassed silence while everyone just sort of stared at me or, worse, golf-clapped.

Fortunately, it all went fine, and one of the poet-judges came up and shook my hand and said he’d really enjoyed my poems. I’d like to say that I’m completely over that sort of negative thinking now – but I’m not. Although I am better at sharing my work these days, I still sometimes feel as if whatever I’ve just written is awful (this column! It stinks! Get the Febreze!); and I’d hazard a guess that many successful writers still deal with that fear as well. However, I’ve found one method of writing that doesn’t come with the side effect of staring dully at your computer at 2 a.m. while moaning, “This is just terrible.” And it is: collaboration!

One of the best things I’ve discovered about writing comics in particular is how much fun it can be to collaborate, with either an artist or another writer; and how, if you’re lucky, you can find someone who not only complements your own ideas but adds to them to make the whole shebang that much better. Comics is an art form that naturally lends itself to collaboration and often actually requires it, and I’ve learned that I love that.

One great thing about having a collaborator is that you’re both in the creative process together, with the goal of producing a good end product; and so you have someone who cares as much as you do to tell you if they think something’s funny or if it works, or to bounce ideas off of, or to brainstorm with. Because you know they care, you can trust that they’ll be honest in their opinions or suggestions on how to improve the work. Having that other person adds a new dimension of fun to the process, gives you ongoing external feedback that you can trust, and, for me at least, strips away a lot of that internal worry about whether one single other person out there will like my work – because I already know that there’s at least one other person out there who likes it enough to work on it with me!

I first learned the fun of collaborating while working with Marc Vuletich, who’s the artist for all of the webcomics I’ve written to date. I “met” Marc (in the internet sense) two years ago after seeing his work on DeviantArt, and particularly this comic (so wrong but so funny). I’d commented on a few of the webcomics he’d done with Liam Bradley, and then later on I got a Deadpool script idea (which turned into this strip). But, alas, I cannot draw (well not very well, anyway). So I contacted Marc and asked him if he was game to draw it for me. Happily, he was, and it turned out he’d actually read Ask Deadpool before, and liked it, which was a pretty good sign for us working together.

Thus begun our collaboration. I could tell from the first comic that he was going to be fun to work with, because not only did he enjoy my scripts, but he made me laugh at my own comic, adding things I hadn’t mentioned but that fit right in with the spirit of the script, or doing such a good job on a character’s expression that it was just like what I’d pictured, only somehow better. Marc’s work improved on my vision, and strange as it may sound, that made me enjoy my own writing more. It also helped me to see where I could improve my writing, as, for instance, when I would get too wordy and then realize there was no way Marc could fit all of that text into one frame. Okay, so I’m still too wordy sometimes (sorry, Marc!) – but at least now I know it!

Writing for an artist also helps a writer better visualize and develop the balance of text versus action that makes a scene work. Seeing the results of your imagination as visualized by someone else provides new ideas for future ways to frame things or order your storyline. And, of course, working with someone else forces better discipline when it comes to responsibly meeting deadlines, as you need to finish writing in time for your artist to draw the comic and send it back for editing and finalization.

One of the great things about collaboration can be when you find someone you work well with, and work with them long enough to establish a good sense of teamwork and synchronicity. I asked Marc to weigh in on what working together is like, to see if his perspective matched mine, and here’s what he said:

“Emily is really great to work with. First, we both share the same passion for the character Deadpool, and second, her writing style totally complements his comedic personality which makes drawing her comics so enjoyable. The scripts are always very descriptive, which gives me a clear picture of what she’s looking for, while at the same time I still have the artistic freedom to add my own little touches to the comic. The only trouble I used to run in to was finding a way to balance the amount of dialogue in each panel with the action happening around it, but now that we’ve been working together for a while I think we’ve reached this cool little groove where we know exactly what each other wants and we make this awesome team because of it.”

Yep, I think we’ve got some synchronicity going.

Along with my collaborations with Marc (and he’s working on a new script right now that may appear here soon), as I mentioned a couple of weeks ago I’ve recently started working with another writer to develop a new comic series that will be epic in scope. I don’t know if it was luck or fate, but it just so happens that we started talking at just the right time and under just the right circumstances to come up with this fantastically fun idea and discover that we are the perfect foils for each other’s zany brainstorming. I’ll suggest a scenario, and he’ll add something that’s like the missing puzzle piece as to why that scene would be awesome. Or he’ll say something that I’d never have thought of but that fits perfectly into another idea I haven’t even mentioned to him yet. And the best part of all is that he loves my ideas just as much as I do, and vice-versa. There’s no sitting around worrying about whether anyone but me thinks this would be any good – instead, there’s enthusiasm on both sides and a new horizon of infinite possibilities stemming from our creative partnership.

I can tell you right now that this is probably the most creative fun I’ve had in my whole life. And it’s a writing experience I might never have if it weren’t for the collaborative nature of comics. So hooray for comics, and collaboration, and the way this process helps us overcome our writing inhibitions and become better creators.

And remember, we’re in this together! So until next time, Servo Lectio!

WEDNESDAY: Mike Gold Outs Much Ado About Nothing