Review: “Superman: Whatever Happened to the Man of Tomorrow?” by Alan Moore and various artists 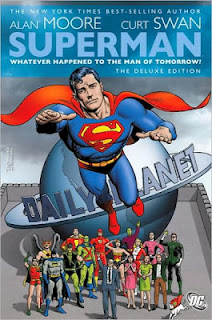 If you know this story at all, you know the quote: “This is an imaginary story…aren’t they all?” That would be true but trite if it weren’t for the fanatical identification of the superhero reader with his favorite characters — and, even more so, with the continuity of their stories. When “Whatever Happened to the Man of Tomorrow?” first appeared, in the then-last issues of Action Comics and Superman in the fall of 1986, as the decks were being cleared for what still looked then like a fresh start for DC Comics’s characters in the wake of Crisis on Infinite Earths, continuity was still something in large part built by the fans, a collective work of imagination linking the most interesting and resonant parts of a thousand stories told over five decades.

Now continuity is just another commodity: carefully spooned out, measured by drops and pints and liters, controlled almost day-by-day by the two big comics companies, as they alternate shocking reveals with the inevitable returns to the fan-preferred status quo ante. Continuity, these days, is just the name of another dead comics company — Marvel and DC tell you what the past is today, and they’ll tell you differently tomorrow, and if you don’t like it, well, where else can you get your stories of Superman and Spider-Man?

Alan Moore isn’t part of our new world, of course — even if everything else had been different, and DC hadn’t screwed him over at every possible turn over the last two decades, his sensibility couldn’t fit into the current soup of cynicism — and his superhero comics come from the ’80s and ’90s rather than now. His few actually cutting-edge works — primarily Watchmen and Miracleman/Marvelman — worked to undermine retro nostalgia, and to show what costumed heroes might be like, psychologically and physically, in something more like a real world. But most of his comics that deal with superheroes take them as icons, as the true representation of what a young Moore must have seen in them in the ’50s — from these stories to Supreme to the superheroes scurrying around the margins of Swamp Thing, trying valiantly but completely out of their depth in more complicated works of fiction.

Superman: Whatever Happened to the Man of Tomorrow?

is a 2009 hardcover collecting three Alan Moore-written stories from 1985 and 1986, illustrated by different artists. The longest piece — that swan song for the Silver Age Superman — is given pride of place, first in the book with title and cover features, and it has suitably iconic art by classic Superman artists Curt Swan (inked too fussily by George Perez in the first part and more straightforwardly by equally classic Kurt Schaffenberger for the climax). Moore takes all of the pieces of Silver Age Superman’s furniture — the silly villains, the big cast with their complicated relationships, the thousand toys and wonders — and systematically breaks them all down and takes them apart, in pursuit of his big ending. It’s impressive in the context of comics of the time, though the ending, seen twenty-plus years later, is too facile and the pieces that should be tragic are just swept under the rug. But it is a Silver Age Superman story, so those are features rather than bugs: those stories can’t be any deeper than they are, or they would be something else.

The other two stories collected in this book are something else, and see Moore using Superman to tell deeper, more resonant stories: first is “The Jungle Line,” from the minor team-up book DC Comics Presents, in which Superman is infected with a deadly Kryptonian disease, and heads off to the least superhero-infested part of the USA — the Louisiana swamps — expecting to die. Instead, he runs into Swamp Thing — star of the monthly comic Moore was also doing excellent work in at the time — and finds a way not to die of his affliction. It’s strengths lie equally in Moore’s incisive captions — particularly as he examines Superman’s failing powers and growing sense of mortality — and in the art of Rick Veitch and Al Williamson, which is much more like the Swamp Thing look, lush and full and organic, than the Superman comics of the time. It’s a minor team-up story, of course — entirely about something that doesn’t happen — but it’s a small gem of its time.

The last story here, though, is something stronger than that: “For the Man Who Has Everything,” which was the Superman annual in 1985 and has Dave Gibbons’s inimitable art support: precise and utterly superheroic in every line, but modern and detailed and dramatic in ways that Swan and his cohort weren’t. It’s a story of Superman’s birthday, and of the best and worst possible present. It’s the only Superman story that has ever made me tear up, and possibly the only one that ever could: it gives Kal-El (Moore, again, is most at home with the Silver Age version of Superman that he grew up with) what he always wanted, and makes him tear himself away from it. It’s completely renormative, of course, in the style of the Silver Age, but it points directly at Watchmen, which Moore and Gibbons would start work on within a year, and it implies Moore’s growing uneasiness at always having to put all of the pieces back neatly in the same box at the end of the story.

So this book reprints three very good ’80s superhero stories by excellent creators — but readers do need to realize that these, if not actually Silver Age stories, have a Silver Age sensibility and feel to them. In particular, Moore’s DC work was very heavily captioned, which has gone entirely out of style these days. If you can’t stand a Superman who’s a big blue Boy Scout, who has a dog named Krypto and a fortress in the Arctic with a gigantic gold key, and who would never ever kill anyone under any circumstances, this is not the book for you.