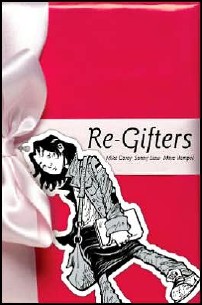 DC Comics caused a bit of a ruckus late last year when they announced their new Minx line of comics. Minx was avowedly an attempt to drag the large audience – mostly young, mostly female – for translated Japanese [[[manga]]] back to American creators by giving them books in formats and styles similar to manga. Some feminists took an instant loathing to the name, and to the fact that most of the announced creators were male, but everyone seemed to think that the idea was a good one. (Though I’m still surprised that no one has done the obvious thing: spend the money to start up an American equivalent of Shojo Beat

. The manga system works so well partly because the periodicals act as try-out books and party because popular series can be sold twice, as periodicals and books. Trying to create a manga-like market with only collections is like trying to ride a bicycle on one wheel – you can do it, if you’re Curious George, but it’s difficult and slow.)

I’ve recently read two of the four Minx launch titles, and thought it would be interesting to look at them together. (The other two, which I haven’t seen, were Good as Lily

by Derek Kirk Kim and Jesse Hamm and [[[The P.L.A.I.N. Janes]]] by Cecil Castellucci and Jim Rugg. And more books have already been announced to follow.) I’ll admit that I’m not the target audience for Minx’s books – I’m about twenty years too old, and sport the wrong variety of wedding tackle – but I am definitely the audience for a new book by the creative team behind My Faith in Frankie

, and for a new book written by Andi Watson. And I’m certainly part of the audience for interesting, new American comics done well, no matter who they’re supposedly aimed at.

, which is both more essentially conventional in its story and more successful in the end. It is a reunion of the crew behind [[[My Faith in Frankie]]], down to the publisher and editor – and the story has certain parallels to Frankie, as well. Our main character is a dark-haired young woman (Jen Dik Seong, aka Dixie), with a blonde best friend (Avril, who starts to narrate the story but is stopped quickly). Dixie thinks she’s crazy about a blonde boy (Adam), who turns out to be not quite as all that as our heroine at first thought. The narration, in Dixie’s voice, is also a bit reminiscent of Frankie’s. But that’s about the end of the parallels: Dixie’s story is completely down-to-earth, without any gods or other supernatural elements. (It’s also aimed at a younger audience than Frankie’s, so there’s no sex, either, and Dixie is a couple of years younger than Frankie was.)

The art on Re-Gifters looks loose; the cross-hatching and shading in particular has a very quick, easy line. But despite that apparent freedom, the drawing is always under control and incredibly expressive. Dixie is training for and then fighting in a hapkido tournament as the book goes on, and even this very non-visual and non-martial arts reviewer could easily follow the action. Liew and Hempel have worked together before, and they know how to make each other look good.

To put it bluntly, Re-Gifters is a story about a teenage Korean girl who has a crush on a boy from school and wants to win a martial arts tournament – it has a plot not far removed from a dozen Disney movies and after-school specials. But Dixie’s story is well-crafted and told with both heart and intelligence, so this isn’t just a book for current high-school students, but also for those who can still remember what those days were like. 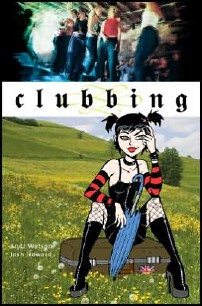 is a book I had higher expectations for; I’ve been a fan of Andi Watson’s work for several years, and his last few projects (Geisha

) have all been wonderful. But I haven’t seen him write for another illustrator before, and [[[Clubbing]]] features the art of Josh Howard, who I wasn’t previously familiar with. (He apparently is the creator of a comic called Dead @ 17

, which I suspect is yet another one of those zombie books.)

Our main character in Clubbing is Charlotte Brook, a rich, spoiled London girl with more clothes than sense and eccentric relatives all over the globe. (She’s sent off to one set in this book, and is packed off to Tokyo at the end for further adventures in the next volume.) She’s a little too rich and too spoiled – and doesn’t get enough of a comeuppance for it – to function well as a viewpoint character for me. Her narration is also just a bit too obvious, not quite wry enough – Charlotte is on top at all times (unlike Dixie), and so we just follow along as she deals with temporary setbacks like working in a golf pro shop, rainy English weather, having to wear huge waterproof boots and other fashion disasters, and learning that rural Goths are not at all the same as her urban tribe.

Howard’s art is fine for the book, with nice uses of tone and blacks; he’s an illustrator draws for black-and-white reproduction, and does so well. I find his eyes a bit too big, especially Charlotte’s, but that’s the sort of thing you have to live with if you’re trying to imitate manga. I’d also have liked a bit more variety in his facial expressions; his people tend to have the same face no matter what they’re saying or doing.

Clubbing wanders away from the expected as the plot goes on – I’ll mention that there’s a murder early on, which Charlotte wants to solve with the aid of a boy she sort-of likes, and things get weirder from there. It all makes sense on a plot level, but it doesn’t really make emotional sense, or affect Charlotte. (On the other hand, nothing really affects Charlotte, which is one of my problems with Clubbing.) Perhaps I was expecting the close character studies of Watson’s solo works, and perhaps I’m not giving Clubbing enough credit for the fun, frothy, supernatural fashion-Goth story it is, but it all turned out a bit disappointing. Girls who live to shop – and live to shop for clothes in various shades of black, to boot – will probably like it better than I did.

I won’t draw any sweeping conclusions about Minx’s line from two books; that would be silly and pointless. But from the evidence of these two books, and the previews of other titles in the backs on these volumes, Minx is making an effort to focus on stories about more-or-less real girls, starting in a mostly real world. It’s a decent strategy to target those girls with stories they can identify with, though it’s more reminiscent of classic Young Adult fiction (particularly the Problem Novel) than the wild flights of wish-fulfillment fantasy of most manga for teenage girls. On the other hand, counter-programming is a time-honored strategy that often works, and I bet Minx’s focus will also help them get their books into libraries. I wish them luck; the American comics market could use a bit of diversity, and the manga-loving girls might learn that creators closer to their own lives have some great stories to tell, too.