What a Pile of Books Demanding to Be Reviewed Looks Like 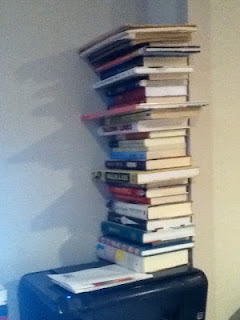 My plan to reduce the stack of read but unreviewed books by reviewing one a day has fallen sadly afoul of events — and the particular “event” in this case was the fact that Thing 2 (my younger son, now 11) and I have been playing a lot of Lego Indiana Jones 2 the last week or so.

(It’s not new, but all of the Lego games – except for Harry Potter, which has over-complicated game mechanics — are so much fun that it’s great just to pick them up and run around smashing things and jumping your little man around randomly; they’re the kind of games that make you happy just to look at on the shelf and even more so to pull them back down and play.)

In other, unrelated news, my iPod Touch has been acting up for the past couple of weeks, and finally succumbed to the Ubiquitous White Screen of Death over the last few days. Even the so-called “genius bar” — I’ve been a user of Apple products for a long time now, and I greatly preferred it when they were scrappy underdogs and not arrogant SOBs — was no help, and so I ended up having to get a new one earlier today.

So far, it doesn’t seem all that different — it supposedly has the super neat-o keen-o “retina display” and a faster processor, but it basically seems like the same device to me. Except. This new one has a camera in it, a cheap crappy phone-style camera, so I can now take cheap crappy pictures of random things when I remember to. And so, this afternoon, instead of actually writing a review for one (or more!) of the books in that big stack, I played some more Lego Indiana Jones 2 with my son, took a picture of the stack of books, and wrote the above.

I’m not proud, mind you.