But have I talked about how much I love Cable & Deadpool (a.k.a. The Greatest, Most Insane and Slightly Twisted Buddy Story Ever Told)? Not enough, I haven’t! And I’m not just talking about Patrick Zircher’s or Reilly Brown’s excellent art (with a bit of Mark Brooks and other talented folks as well), although I do love that. I’m also talking about the superbly engaging and zany characterization, storytelling, and relationship that Fabian Nicieza developed during his time writing the book.

Before the series, Cable and Deadpool had met as adversaries and then as two guys who are having a tough time in their (super-powered) lives and end up sort of commiserating about it; but they hadn’t shared too much page time together. However, that all changes in the first few issues of Cable & Deadpool (2004-05). I don’t know if Nicieza pitched the idea, or if someone at Marvel was just like, “put together two characters for not much reason whatsoever except that their individual books both ended recently and they’ve met before? Yes, that’s what we’ll do!” but in the start of the series, Nicieza has to provide us with a viable reason as to why these two are going to hang out together for what ends up being a 50-issue run (well, mostly; Cable disappears from the last several for outside continuity reasons). And he does it with psychotic aplomb.

To make a long story short, there’s this virus called the Facade virus, and both Wade (Deadpool) and Nate (Cable) have been infected. The Facade virus is supposed to change everyone and make them blue, because the people using it (the “One World Church”) believe that making everyone the same color will somehow be the first step in stopping disagreements and fighting in the world. Well, the virus does turn people blue, but unfortunately there’s a pesky little side effect: it causes them to melt and die. (Ah, I love comics.) Since both Cable and Deadpool are not like ordinary people, it affects them a bit differently. In Deadpool, it still causes him to melt, but a lot more slowly because of his persistent regenerative powers. In Cable, it acts to block his telekinetic and telepathic abilities that control the techno-organic mesh that makes up part of his flesh (hey. that rhymed!), causing the T-O to start taking over his body and immobilizing him. Cable determines that the two have to swap DNA so they can pool their abilities in order to save themselves.

Once Deadpool is fully melted, Cable absorbs him through his pores (yes, really) and then, I kid you not, pukes him out (Deadpool: “You swallowed me!”). While doing so he manages to use his powers to fix the glitches in the virus which he’d figured out earlier on. He also manages to mix their DNA, which is Relevant To Our Interests because it explains a fair amount of why they are now stuck together. You see, after recovering, Cable reconstructs an old space station of his that includes a teleport matrix. The way the matrix works is that Cable says, “bodyslide” and the machine identifies his DNA and uses it to teleport him. He can teleport himself with a “bodyslide by one,” or a team with a “bodyslide by X number.” But now, when he says “bodyslide by one,” the matrix reads Cable and Deadpool as one person, due to their mixed DNA, and they are teleported together, as one mixed up entity with 8 arms and legs. (Aieeee!) After a couple of times accidentally teleporting like that and having to tear themselves apart into two people again (which they can do without dying thanks to the healing factor), Cable figures out that if they say “bodyslide by two” it will still teleport them both, but as separate people. The end result of this is that whenever one of them bodyslides, the other gets pulled along for the ride. Voila! Team-up explained!

And thank Odin, because they really are just so perfectly fun together. Deadpool, as we all (should) know, is funny as hell, and Nicieza writes him with a perfect mix of off-the-wall humor, outright insanity, and darkness. Cable on his own never did much for me until after Cable & Deadpool, after which I liked the character enough to keep up with his story due to leftover warm fuzzy feelings. But he works so well as Deadpool’s conscience, friend, and straight man that I can’t help but love reading about the two of them. Plus Nicieza writes Cable with a wry sense of humor that fits perfectly with his character but doesn’t seem to come out much around anyone but Deadpool. It’s like with Deadpool he can let himself go; which is probably one reason why he’s fond of him and indulgent of him.

Don’t get me wrong – I don’t love this book because it’s all the sunshine and happiness of two bestest buds skipping merrily through a field together. When I say “engaging” and “fun,” sure, I’m talking about consistent laugh out loud jokes and moments. But I’m also talking about an interaction between two characters that, even when it’s sad and depressing (it happens), is intellectually and emotionally interesting. And while I love a good superhero fight, that kind of story and character interaction in a comic is what really draws me in.

So in that vein, (Massive Spoiler Alert. Seriously, skip to the end if I’ve convinced you by now that Cable & Deadpool sounds like fun and you want to read the book without spoilers) here are my top six examples of why Cable & Deadpool is such a great twisted bromance/buddy story:

1) When the X-Men seek to stop Cable from his plans to (peacefully) run the world as he thinks best, Deadpool, Outcast Extraordinaire who would desperately love to be a part of any team but is never invited, is asked to help them (well really because they need his ability to enter Cable’s domain at will). Deadpool, at the moment when he’s supposed to take Cable out, instead turns on the X-Men so he can warn and save Cable, even though he knows it means giving up the offer to be part of the X-Men. He does it because he really believes in Cable (even if he won’t admit it out loud).

2) After Deadpool follows Cable’s instructions and plugs him into a machine that lobotomizes him (which Cable knew it would do, but Deadpool didn’t) he spends the next several issues fighting his way through A.I.M. and a bunch of super-powered dudes to obtain an alien embryo that will bring Cable back (and Cable is so happy to hear Deadpool’s voice on his return, and Deadpool so happy to see Cable awake and whole again, that it might be one of the cutest woobie moments ever). Deadpool is even willing to use his own money to pay for Cable’s treatment.

3) When Deadpool, for no good reason, murders someone on Cable’s floating peace-and-goodwill island, Cable at first doesn’t get involved because he wants to give Wade the chance to make the right decision” about turning himself in. He really believes that Deadpool might be able to be a better person, which is something Deadpool can really use in his life, since even he has a hard time believing it half the time.

4) After Deadpool fights his way through several different realities to find a missing Cable, brings him back to Earth-616 as a baby, and attempts to “mentor” him as Cable is restored to his regular age and powers in an accelerated manner, Cable chooses to burn out much of his newly-restored power in fixing the most damaged parts of Deadpool’s brain. All that power and he just wants to help out his best bud. D’aww. 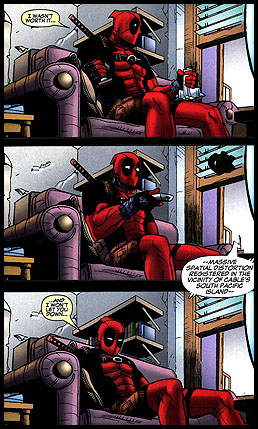 5) When Deadpool can’t get any mercenary work (the world is still pissed at him for lobotomizing their mutant savior earlier, among other things) Cable secretly hires him so he will feel useful without feeling like the jobs are handouts. Later on, Cable actually messes with Deadpool’s subconscious to try and get him to think about his past actions and recognize his remorse. Of course, this somewhat questionable move results in more Deadpool craziness, a fight between the two in a bar, and another parting of ways, but the point is, Cable can’t stop himself from trying to help Deadpool, because he genuinely cares.

6) In the ultimate act of friendship, after Deadpool hears about an attack on Cable’s island and goes to help (because of course he does; you can be mad at your friend and still want to help him), Cable, who knows he must detonate the island while still on it, which will kill him and anyone else still there, sends Deadpool off on a very important mission to stop information from falling into the wrong hands. When Deadpool reaches the statue holding the information, it turns out to be a teleport matrix, which lands Deadpool safely back in his apartment as Cable dies. Deadpool, of course, doesn’t think he was worth saving. But Cable did, and that’s what mattered. The issue ends with Deadpool swearing he won’t let Cable down.

If those six examples haven’t given you at least a couple of warm fuzzies about the nature of Cable and Deadpool’s crazy friendship (as well as making you (rightly) question whether it isn’t just a leeetle bit twisted) then get out of here, because I don’t trust robots. If they did, however, or the part before all the spoilery goodness made the book sound like fun, I suggest you send yourself back in comic-book time a few years by picking up the trades, because they’re all still available and really, if you don’t you’re just denying yourself a good time.

Either way, thanks for indulging me by reading my little love note to one of my favorite team-ups of all time, and until next Tuesday, Servo Lectio!

P.S. And check the comments on my last column to see if you won the Avengers cologne!