Mike Gold: Before Watchmen, Because… 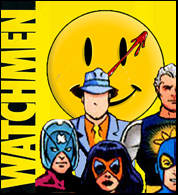 It seems everybody has his or her tits in a wringer over this upcoming Before Watchmen thing. I’ve made a few comments here and there, but now that these books are about to come out, I’m going to weigh in officially.

I’ve been reading the solicitations in the Diamond Catalog and to be sure there’s a lot of great talent involved on these efforts. Really top-notch people, some of whom we haven’t seen much from lately. Most of these folks are basically if not emphatically pro-creators’ rights. Aside from the latent listings, I’ve read the thumbnail descriptions as well as DC’s press releases. There’s a lot of comic books involved here, and I approach Before Watchmen with the same question I approach any new effort: “Does this seem like it’s worth my time?”

Obviously, sometimes I make the wrong call – particularly when it comes to television. I’ll decide to pass on something and within short order all my friends, most of the reviews, and complete strangers at conventions will excoriate my witlessness. That’s fine; endorsements from people whose opinions I respect carry a lot of weight. Of course, if I try something and I don’t like it, I take a hike. I haven’t tried a second bottle of Moxie in three decades.

So as I gaze upon all these Before Watchmen comics, I ask myself “Does this seem like it’s worth my time?” And I hear myself say to myself “Well, no, it doesn’t.” Oh, I’ll probably check out a few produced by friends. But, by and large, unless I’m persuaded otherwise I’ll be giving the overall effort a pass.

Here’s the beauty of Watchmen by Alan Moore and Dave Gibbons: it was a true graphic novel, with a beginning, a middle, and an end. They created it, it came out the way they intended it to (or very close to that), we all read it and it went on to become one of the best selling graphic novels of all time. I suspect that latter part was for a reason, that reason being I was not alone in my assessment.

They left no room for sequels, and they really didn’t leave any room for prequels. Those prequels were already done. They were published by Charlton Comics during the Dick Giordano reign, just as Watchmen was published by DC during the Dick Giordano reign. The characters were called Peacemaker, Blue Beetle, Peter Canon Thunderbolt, The Question, Captain Atom, and Nightshade. Without these characters Watchmen either would not have happened or would have been based upon other characters DC owned but didn’t care all that much about – most likely the Fawcett or the Quality heroes.

So in my mind, Before Watchmen is unnecessary. Been there, read that. Your opinion may vary, and that’s totally okay by me. In fact, these friends of mine would like the opportunity to earn themselves some Watchmen royalties.

Then there are the moral issues.

Legally, nobody knows where it stands unless they’ve read the contract(s). I haven’t, but I was an executive at DC Comics at that time – actually, about a month later – and I can tell you that, in my professional opinion – DC didn’t commit in writing to anything but money, and maybe a few artistic oversight issues. Maybe. It just wasn’t done then; it’s barely being done now, and it was only sort of done from time to time in between. Somebody might have given his or her word about how merchandising, licensing, promotion, prequels, and sequels would or would not be done and Alan and/or Dave might have trusted those people… but those people are no longer around. Well, they’re not at DC Comics; they’re still around.

What it comes down to, for me, is respect. It makes absolutely no damn sense to alienate anybody in the creative arts, and it’s really, really stupid to go to such lengths to alienate people of the highest caliber. It’s bad business, it’s worse human relations.

I’ve read much if not all of what Alan has said, and I while I disagree with some of his sentiments there is one thing that is unimpeachable: as a creator, as a writer, as a source of wealth for the publisher, Before Watchmen shits all over him.

Some of my friends disagree, and I respect their positions. This isn’t clear-cut in the least: morality is a personal thing, and what is immoral to one person is just ducky with the next. You can react emotionally and that’s fine. Sometimes that’s all you will get.

Thus far, nobody has picked up a gun and started shooting up the place. I’m not being sarcastic. It’s happened in other media. Google “Marvin Glass” and “shooting” and find out how it came down in the toy design business.

So, yeah, I think Alan was treated badly here. But that’s really not the reason I’m planning to avoid Before Watchmen. I’m avoiding it because, when everything is added up, it just doesn’t seem to be worth my time.