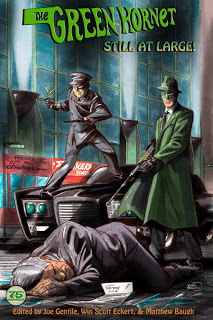 I’m pleased to announce the final contents for The Green Hornet: Still at Large, due out from Moonstone Books in July 2012.

Edited by Joe Gentile, Win Scott Eckert, and Matthew Baugh, this third anthology featuring the 1960s Green Hornet, based on the television program starring Van Williams and Bruce Lee, follows The Green Hornet Chronicles and The Green Hornet Casefiles, and will ship in two editions.

The softcover trade paperback features a cover by Douglas Klauba, while the limited edition hardcover boasts a cover by Ruben Procopio. It is anticipated that as with the prior books, the third volume will also see an eBook edition, although the specific date has not been announced.

“Hero” by S.J. Rozan
“The Black Torpedo” by Will Murray
“The World Will End in Fire” by Richard Dean Starr
“The Man Inside” by Matthew Baugh
“Death from Beyond” by Ron Fortier
“Play the Game” by Thom Brannan
“The Gauntlet” by Bobby Nash
“Chaos and the Year of the Dog” by Bobbie Metevier
“Axford’s Sting” by Dan Wickline
“Revenge of the Yellowjacket” by Howard Hopkins
“The Man in the Picture” by Patricia Weakley
“Masks” by C.J. Henderson
“Bad Man’s Blunder” by John Allen Small
“Losers, Weepers” by Rich Harvey
“Stormfront” by Greg Gick
“The Night I Met The Hornet” by Mel Odom
“Progress” by Win Scott Eckert

“The Green Hornet Timeline,” a chronology of the Moonstone stories from the three anthologies, fit into the timeline of the original television episodes, by Win Scott Eckert

A bonus story featuring the 1930s-40s Green Hornet from the radio show and serials, “The Green Hornet Meets The Avenger” by Michael Uslan