FORTIER TAKES ON THE BLACK CENTIPEDE IN ‘CREEPING DAWN’! 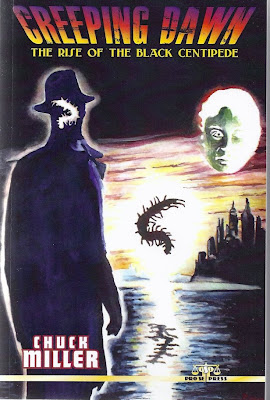 Chuck Miller is emphatically one of the bright new voices in the New Pulp Fiction movement and last year burst on to the scene with this book.  It introduced the world to his truly mondo-bizarro hero, the Black Centipede.
Describing Miller’s twisted, odd and vibrant style is a challenge in itself.  Unlike traditional classic pulp writers, his work is a hodge-podge blend of history and fiction and told from way too many different perspectives.
Written in first person narrative, the Black Centipede is a young man who crosses paths with the infamous Lizzy Borden of Massachusetts and through her encounters a mysterious being calling herself “Bloody” Mary Jane Gallows; the supposed spiritual creation of Borden and Jack the Ripper.  If that wasn’t twisted enough, our hero is saved from being murdered when his own body is possessed by another alien entity representing itself in the shape of an ugly, creeping black centipede.  Once this merger occurs, he finds himself capable of many super human feats of strength.  He becomes, like Will Eisner’s Spirit, virtually impossible to kill.
From that point on his adventures have him crossing paths with real life figures such a gangster Frank Niti and newspaper tycoon, William Randoph Hearst who wants to turn the Centipede into a popular “real life” pulp hero in his own magazine.  Then there are villains like Doctor Almanac, voodoo fighter Baron Samedi who battle across Zenith City, each with his own perverse agenda and little regard for the citizenry caught in the middle.
It’s fanciful stuff indeed but this reviewer wishes Miller would make an attempt at sticking to one point of view.  Towards the end of this first outing, we are given an entire chapter told to us by a police officer who was on the scene.  Supposedly this is necessary because the Black Centipede was on the other side of town when the incident took place. Still paragraph after paragraph of hearsay is as deadly in a novel as it is in a court of law.  Writing rule of thumb, Mr.Miller, show us, don’t tell us.
Still as this is his first book, that one flaw is easily overlooked for the overabundance of originality infused in this book.  With “Creeping Dawn,” Chuck Miller clearly establishes himself as a voice to be reckoned with.  We predict a truly brilliant future for both creator and his one-of-a-kind hero.